Smoke-friendly hostels and hotels in Amsterdam 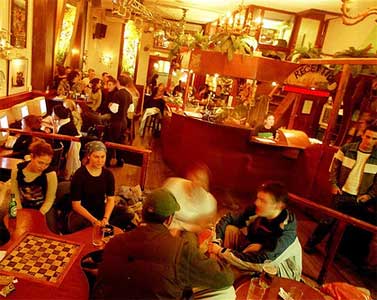 Amsterdam and smoking have an interesting relationship. Starting on July 1, 2008, the city joined so many others in the world in banning smoking (of tobacco) in all public indoor places. This means all hotel lobbies and lounges, except in a few special circumstances, are off limits to all smoking. If you are a tobacco smoker, you’ll be more than a little unhappy to know that over the past few years almost all Amsterdam hotels have made all of their guest rooms smoke-free as well.

But the news is not all bad, and especially those who are more interested in smoking pure weed than smoking tobacco or a combination, still have several really good choices. Most of the best Amsterdam “party hostels” have figured out one way or another to allow smoking, and we’ve listed the recommended ones on the map below, with reviews of their smoking situation below that.

Map of smoke-friendly hostels and hotels in Amsterdam

(Move your mouse over the map for names, prices, and booking information)

This notorious party hostel has a fun and busy bar that has great drink specials all day and all night, as well as a special indoor smokers’ lounge, so in addition to just being a cool place, this is a great hostel for the smoking set. More good news comes in the fact that there is a coffeeshop (the Blues Brothers Coffeeshop) just a few steps out of the front door, so you can buy weed and get the full experience and you’ll barely have to change out of your bathrobe.

This isn’t a hostel with dorm beds, but it’s fairly cheap considering all you get, so in a group it’s still in a good price range. They have about 20 hotel rooms and self catering apartments in a nice part of the Red Light District, many of which are a few blocks from the main bar and coffeeshop. And speaking of that bar and coffeeshop, you can buy weed in one and smoke it there, or bring it next door to the bar and smoke while drinking. Last time I checked, they were allowing both tobacco and weed in the actual bar, but this could change since it could potentially get them in trouble. The rooms are smoke-friendly as well, last I heard.

This excellent hostel and hotel just down the pedestrian-only street from the Greenhouse Effect doesn’t allow smoking indoors, but they have a fantastic and large patio area just behind the bar where smoking pretty much anything is permitted, and it’s a party that goes on all night. The rooms have a no-smoking policy, but many of them, especially ones on the upper floors, have a sort of balcony thing attached so you can open the door to the outside or just walk out there and smoke your head off. If smoking in the room is important, try to arrange one of these balcony rooms if you can.

The Bulldog Hotel and Hostel

The Bulldog is yet another hotel and hostel combination in the Red Light District with an unmistakable party vibe. This is a chain that started with the very first coffeeshop in Amsterdam, and this hotel carries on with that philosophy with a smokers lounge in the hotel as well as a few coffeeshops in this neighborhood. It’s in a slightly seedy part of the Red Light District, but if you want to smoke and have fun, this is the place to be.

This place is a small hotel with private rooms and no dorms, and it’s totally set up to be smoke-friendly so if you aren’t a smoker it’s best to stay away. They have a lounge and even a common kitchen, so if you find yourself with the munchies you might not have to go too far to satisfy your cravings.

This is the famous brother of the Flying Pig Downtown hostel, and pretty much everything described in that review above also applies to this place, at least on the inside of the building. One major difference is this place looks out on Vondelpark near the museums, and that means that smoking outdoors is very easy to pull off. You can smoke weed in Vondelpark too, but be respectful to avoid crowds and definitely avoid children. I cover this more fully in the places you can smoke in Amsterdam section of the coffeeshops FAQ. There are no coffeeshops too close to this place, but a few of the best ones in the city (namely De Rokerij) are not far away in the Leidseplein area.