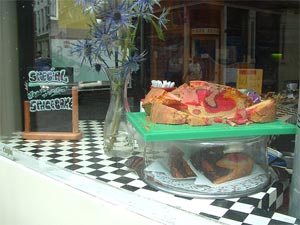 This would probably be a better world if all humans were born with an aversion to sucking smoke into our lungs that rivaled our aversion to jamming sharp objects into our eyeballs. But for one reason or another, many of us have willingly started down the path of filling our chest cavity with hot smoke. Amsterdam is known the world around for its coffee shops, where anyone 18 and over can legally buy small quantities of marijuana or hashish and then smoke it right there while enjoying a beverage. But not everyone knows that many of these same Amsterdam coffee shops sell “space cakes,” which are more commonly known as pot brownies or hash brownies elsewhere.

If you are one of the many visitors to Amsterdam who are curious about the coffee shop phenomenon, but you aren’t crazy about the idea of coughing for 15 straight minutes as you sort out how to get high by smoking, these space cakes are the answer. They are legal, cheap, and delicious.

Another important thing about Amsterdam that makes them ideal is you won’t be driving when you are here. Only the craziest visitor would dream of renting a car while in this city, or even driving around town in a car you rented elsewhere. Nope, this is a city dominated by pedestrians and bicyclists, but the public transportation in Amsterdam is outstanding as well, so the danger of doing something really irresponsible to yourself or someone else is almost zero.

What is a space cake? 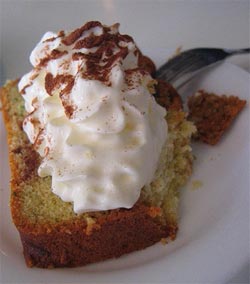 The word “space” is an unnecessary code for any consumable that contains cannabis. Again, these things are legal in coffee shops, so you don’t have to lurk around making hand signals to the cashier in order to get one. Space cakes are the most common, and in this case you’ll get a slice of almost any kind of cake imaginable that contains a dose of cannabis. You can also find space brownies, space cookies, space muffins, space tea, and probably a few other things as well.

You don’t have to worry about how they are made, but if you are curious, the space bakers typically boil broken up weed or hash along with butter in water for a long period of time, and then the mixture gets chilled until the butter has hardened on top. This “cannabutter” is then used in any recipe under the sun, so the possibilities are almost endless, and some people do just spread the butter on toast if they don’t want to go through the dessert-making process.

If you’ve been high by smoking weed or hash, this is very similar, but still noticeably different. The effect usually takes around an hour before you are sure it’s hitting you, and usually about another hour before you are at the peak stage. The high will last around 5 hours total before you can’t really feel much of it anymore, so it’s very important to plan this trip well rather than just eating one impulsively. The peak itself will last for 3 to 4 hours, so you’ve got quite a span of time to deal with.

When you smoke weed or hash the high tends to come on in only a few minutes, and then you only really feel it in your brain, although it does slow down physical functioning and reflexes a bit as well. With spaces cakes the high is still felt in the mind, but also throughout the body in a way that the vast majority of people find to be very pleasant. You could run fast if you wanted to, but you won’t want to. Many people will feel at one with whatever comfortable sofa or chair they happen to be sprawled in when it kicks in, but walking around is also easy and very pleasurable.

If you’ve never been high from smoking, it’s a bit hard to describe, but here are some things most people can expect:

And there are some downsides to consider too

The fact that Amsterdam is an endlessly beautiful city with almost no car traffic makes it the perfect place to wander around in while tripping on space cakes. Sure, there are those pesky (and stunning) canals all over the city center, but amazingly enough, incidents of people falling in canals are almost as rare as incidents of being hit by lightning or being killed by a falling coconut.

Where to buy space cakes in Amsterdam

It used to be that only about one-third of the 150 coffee shops in the city sell space cakes or other space items, but in recent years things have changed dramatically. Now virtually every coffeeshop in Amsterdam sells space cakes, so finding them couldn’t be easier.

There are dozens of coffeeshops that sell space cakes and other space items, and two I can recommend are Baba and Hill Street Blues, both of which are close together on Warmoesstraat in the Red Light District. For more information on these shops along with map information, they are both included on Amsterdamlogue’s Top 5 Coffee shops.

The price of space cakes

It depends on what you are after, but most of them range from €4 to €5 or so. Many places also have space cookies, which are purposely meant to be smaller doses for smaller people or those who want to take it easy. The cookies usually cost €3 to €4 each.

Now that shops all over the city carry space cakes there is a greater price range as well. Most continue to sell strong cakes, muffins, brownies, and cookies for around €5 each, but a few places are now charging up to €10 each. We’ve not tried any €10 ones yet, mostly because the €5 ones are usually damn strong. Our guess is that the expensive places are just preying on people who don’t know better, because if they were truly twice as strong as the others they’d actually be dangerous.

The strength of space cakes

Since overdoing it on these things is sadly common (see below), the coffee shops will almost always quiz prospective buyers before selling you something. They want to be certain a 110 lb./50 kg. girl who’s never smoked before isn’t buying the strongest item they have. Most space items come with a warning label or small sheet of paper explaining the potential dangers (again, see below), and it’s important to heed this advice.

Most every shop that sells space items carries a variety of things from which to choose, each with a different strength. A shop might have brownies that are their strongest item, a muffin that is less strong, and cookies that are fairly mild. Be honest with the person selling them, and take their advice on what to try. Trying something like this and having it barely affect you is a bummer, but trying one and being overwhelmed by it is far worse. As long as you are careful, you can add more to your buzz, but you can’t take it away. The strongest item at pretty much any shop should be strong enough for any experienced smoker, so there really isn’t any need to seek out the strongest space cake in Amsterdam.

This is more thoroughly covered in the dangers of space cakes section of the Amsterdam coffee shops FAQ, but put simply, these things can really nail you if you make the common mistake of eating one and then eating another a bit later because you thought the first one wasn’t strong enough. If you’ve just eaten a meal, it might take up to 2 hours before you are really feeling the high, although on an empty stomach it can happen in as little as 30 minutes or so.

Also, some people will eat a space item and the start drinking alcohol as they are waiting for it to kick in. If you know what you are doing, this isn’t a problem, but the first time you combine these things you might find yourself fainting or unable to walk. Read about the dangers of space cakes before you try them, and you’ll be fine.