Summer flights to Amsterdam are still much cheaper than normal 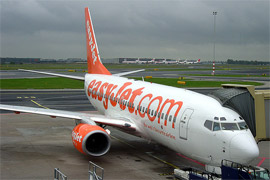 Anyone who has been paying attention even a little bit is well aware that cheap airline tickets are easier to find these days than they have been in many years. Partly as a service to readers of this site, and partly out of curiosity myself, I check airfares to Amsterdam from the places where most readers of this site are located. Even though we are well into the summer flying season where fares are usually at their yearly peaks, cheap flights to Amsterdam are found just about everywhere you look.

I’ve been doing this for about two years now, and I can tell you that the fares listed below are all much lower than they were in Spring of 2008, when flights already seemed pretty reasonable. This time I’ve added London, since we have so many UK readers, and I noticed that Easyjet has roundtrip flights starting at £46 roundtrip. If I lived in London I’d be tempted to come for as little as just a day. Getting from the Amsterdam airport into the city is fast and cheap, so you could be hanging out at a coffee shop or pub in under 3 hours from when you arrived at the airport in London.

If you want to stay for at least a few days, you’ll be happy to know that cheap Amsterdam hotels are easy to find this summer as well, and hostels in Amsterdam continue to be cheap. If you are lucky enough to have some source of income and also have at least a few days off, you’d be crazy not to think about coming here this summer.

I’m guessing that prices will get even lower starting around November, but by then this place turns into an indoor-only city and part of the joy is lost. All the outdoor cafes are bustling during the summer months, so it’s worth at least a bit more to come during peak season, and in case you haven’t heard, Amsterdam tourism is down this year in general, so crowds aren’t as bad as normal, in spite of the low prices on everything.