The locals have been getting the munchies too 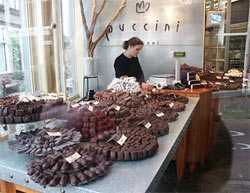 If you’ve been noticing longer than average queues at the Amsterdam candy counters this summer it hasn’t just been your imagination. A recently released survey by marketing research firm AC Nielsen reveals that during this rainy summer the consumption of sweets in the Netherlands has gone up noticeably.

Sales of chocolate bars are up 14 percent, while smaller chocolate candies are up by 11 percent. Cookie consumption is up 10 percent as licorice is up by 4 percent, so it’s not just the glassy-eyed stoners buying up all the sweets this summer, the locals are joining in.

The rainy weather this summer evidently is taking the blame for the face-stuffing increase. A spokesman for AC Neilsen says that weather traditionally plays a role in consumption patterns of the Dutch. Last summer, which was unusually warm, saw higher than average sales of beer, ice cream, and lemonade.

For Amsterdam visitors with a taste for the finer things in life and/or the munchies, the best chocolate in the city can be found at the two Puccini Bomboni stores. One is at Staalstraat 17 and is very close to both the Waterlooplein fleamarket and Rembrandtplein. The other one is closer to Centraal Station, and about a block behind the Magna Plaza shopping center, which is behind Dam Square, at Singel 184.