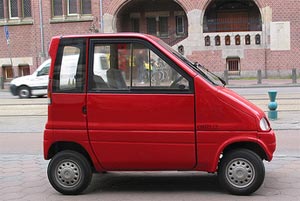 One of the many odd and unexpected treats of any visit to Amsterdam is getting a chance to see (and possibly trip over) what might be the world’s smallest production car. The “Canta” is manufactured in the Netherlands by a small company called Waaijenberg, which also appears to make a more realistic-sized car and also motorized wheelchairs in a three-pronged attack benefiting the less than mobile citizens of the area. At first glance they appear to be a driving wedge cut out of a more real car, but upon closer inspection you’ll see that they’ve got all 4 wheels and there is room for tiny engine up front.

If you’ve seen a Smart Car in person and were shocked by its size, prepare to break out in a fit of laughter when you see a Canta because you could easily fit this thing inside a Smart Car if you had a good can opener and a sturdy friend to help out with the lifting. Most golf carts dwarf these things as well, and it’s interesting to see just what the minimum space is that’s required for two people to be seated in a vehicle scooting around in normal traffic. There also appears to be some space behind both seats, which could come in handy if you bought a magazine or newspaper during your travels. 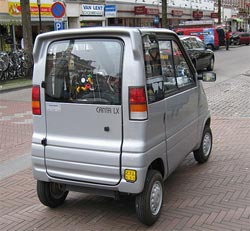 You probably won’t see them too often in the city center, but there are quite a few around the area so especially if you spend a bit of time beyond the Prinsengracht canal ring, you’ll eventually see one. Parking in Amsterdam is predictably challenging so it’s nice that these Cantas can be, and almost always are, parked right on sidewalks. If your building had double doors you could probably roll it right into your flat, so it’s possible there are even more of these things around that live indoors most of the time.

At this point they are quite obscure almost everywhere outside of Amsterdam, partly because they are made by a Dutch company, are surprisingly expensive, and it appears they only make a few hundred each year. The Canta has only been manufactured since 1998, so it’s possible that only a couple thousand have been built up to this point, but details aren’t easy to come by and there is no wikipedia page for the car or the company as of now.

Here are some things I do know about the marvelously miniscule Canta: 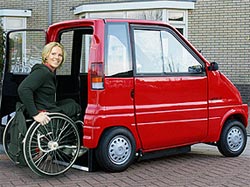 The basic model is the Canta LX, and it goes for €11,850 and comes in red or white. For an extra €1,000 you can instead choose the “Exclusive”, which features that monster 200 cc engine in addition to complete luxury implementation, and also comes in silver or green too. Next comes the LX Exclusive Plus for €13,850, which seems to come with even more luxury (if that’s possible) and a service package. Lastly, the aforementioned Inrij-Canta for €18,500, which is tricked out to be driven from a wheelchair. The extra high price tag seems to come from the fact that there’s a hydraulic lift built in that raises the car up after the wheelchair rolls in at ground level. 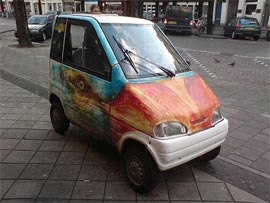 The fact that you literally don’t need a driver’s license to drive one of these things is more than a little shocking to me. The company doesn’t mention anything about a minimum age requirement to drive one, but I suppose the strangely high price tag takes care of that. Anyone old enough to scrape up €12,000 or more certainly would have better things to spend it on than buying a tiny car, or one would hope anyway.