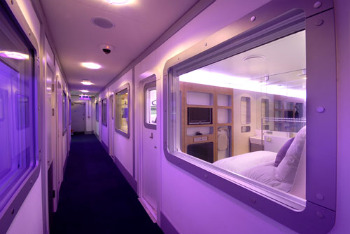 With its canals criss-crossing the city, its relaxed attitude toward things like sex and drugs, and its fascination with french fries covered in mayonnaise, you probably have no trouble calling Amsterdam a unique city. But just because the city itself is unique doesn’t mean all its hotels are. In fact, although there are definitely some interesting accommodation options in Amsterdam, many of the hotels in the city are pretty much what you’d expect of any major European city.

But in addition to the big chain hotels, closet-sized budget rooms, and famous party hostels in Amsterdam, there are a few truly unique hotels you can book if you’re looking for a hotel that will give you as many vacation stories to tell as your vacation itself. Here are 6 unique hotels in Amsterdam to help make your trip even more memorable.

The map below contains icons for each of the unique Amsterdam hotels featured on this list. Click on each one to learn more about it and book it, or scroll down to read a brief description of each hotel. The only hotel that’s not represented by an icon on this map is the one out by the Amsterdam airport – but there’s a link in the description below so you can find out more about it and book it that way if you like.

Hemp Hotel
It’s Amsterdam, so the name “Hemp Hotel” may not surprise you. But it’s more than just a name – this tiny hotel uses hemp in as many ways as they can, from the fabrics to the bed mattresses to the soaps to even the food on the cafe menu. There are only five rooms at the Hemp Hotel, each designed after a different place – Afghanistan, Caribbean, India, Morocco, and Tibet – and the on-site Hemple Temple Nightbar offers all kinds of food and drink made at least partly from hemp.

The Hemp Hotel may be unique, but it’s also budget-friendly – as of this writing, a single is €60/night, and a double is either €70 (for a shared bath) or €75 (for a private bath). A stay comes with breakfast in the morning, including fresh hemp rolls and muffins, and all of the hemp products used throughout the hotel are available for sale at the hotel and through the catalog. And if you really want to take home an unforgettable piece of Amsterdam, the Hemp Hotel is looking for investors so they can expand into a bigger space.

>> Book the Hemp Hotel in Amsterdam

Hotel de Filosoof
Amsterdam’s Hotel de Filosoof, or Philosophy Hotel, pays homage to the discipline in its name in a couple of ways. Each of the 38 rooms in the hotel is designed to reflect either a particular philosopher (Marx, Nietzsche, Aristotle, etc.) or a philosophical school (Zen, Hindu, New Wittgenstein, etc.). The whole hotel is described as “peaceful,” and the common areas include a garden in which you can relax and gather your thoughts. And at breakfast, the placemats under your meal contain quotes by famous philosophers.

The Hotel de Filosoof is actually three buildings, all of which date from the late 19th century and are former independent homes. Although this hotel isn’t among the most expensive in Amsterdam, it may be beyond the reach of most budget travelers. Still, for the unique experience (and the overall high quality of the hotel) the range of €100-250 per night for a room may be worth it to you.

The Arena Hotel
What do you do with a former orphanage after the building is no longer needed for its original purpose? You remodel it and turn it into a super-trendy hotel and night club, of course. This is exactly what happened with the Hotel Arena – it occupies a 19th century building that once housed an orphanage, and it’s now one of the hottest night clubs and boutique hotels in the city. Because of the size of the building, the Arena Hotel is huge by European boutique hotel standards – there are 116 rooms in the hotel and there’s still space for an on-site restaurant, cafe, and bar/night club.

The Hotel Arena is modern throughout, from the amenities to the decor, and it’s not just a hotel for short-term stays. You can arrange to come for a longer period of time and call the hotel “home” for a little while. Rooms aren’t cheap here, at €250+ per night (depending on the room), and breakfast costs extra.

The Dylan
While The Dylan may not seem particularly unique on its own, it is simply the fact that the entire hotel is drenched in Asian themes from top to bottom – while still being located in Amsterdam – that justifies its place on this list. The Dylan has been pleasing boutique hotel afficonados since it opened in 1999, and it continues to get rave reviews. While there are six overall themes, each of the hotel’s 41 rooms is individually-designed.

All of the rooms feature luxurious fabrics, and some have views overlooking the nearby canal. The Dylan has an on-site restaurant (Dylan Restaurant, naturally) and the hotel’s bar opens onto a lovely outdoor courtyard. This hotel will set you back roughly €300 (or more) per night.

The College Hotel
When you hear that this hotel is run largely by college students, you probably wouldn’t expect it to be a 4-star establishment – but you can erase those “Animal House” images from your mind. The students who assist in the running of The College Hotel in Amsterdam are from the Amsterdam School of Hotel Management. The on-site (and highly-rated) College Restaurant and College Bar are also largely run by students. But the hotel also gets its name because of the building it occupies – the 19th century building was once a school itself.

There are 40 rooms in The College Hotel, and the decor is modern throughout. Although this is a 4-star hotel, the rates aren’t as high as you might expect – the staff is in training, so the prices for rooms are a good reminder of that. You can expect to pay €150+ per night, but that’s easily half the price of some similar hotels in Amsterdam.

Yotel
Okay, this hotel isn’t in Amsterdam’s city center, and it’s not meant for long stays where you’ll come back to a room in this hotel each night after exploring the city. But if you’ve got a long layover at Schiphol Airport or a super-early-morning departure, then booking a cabin at the airport’s very own Yotel might be the ideal solution. This micro-hotel is located inside the airport terminal (no going out and back through security when you check out), and you can book a cabin for as little as four hours.

Each cabin comes with an en suite bathroom, a flat screen TV, free WiFi and 24-hour room service. Cabins come in three sizes – premium (double bed), standard (large single bed), and twin (two single bunks). At Schiphol, there are 15 premium cabins, 41 standard, and 1 twin (the other Yotel locations are in London airports). Your initial four hours will cost you €60 for a premium and €35 for a standard cabin; after that, each hour is as little as €8.

Looking for more unique accommodation in Amsterdam?
Although there are many of them throughout Amsterdam (thereby not really making any one of them “unique”), staying one one of the houseboats in Amsterdam could be a fun way to experience the city’s connection to its canals. There are lots of houseboats available for rent, although with most you’re renting the entire small boat as opposed to a room like a hotel – so think of it like you might think of a vacation rental, only it’s smaller and you don’t have to be staying for a week to make it a good option.