Urinals in Amsterdam – An unusual tourist attraction, of sorts 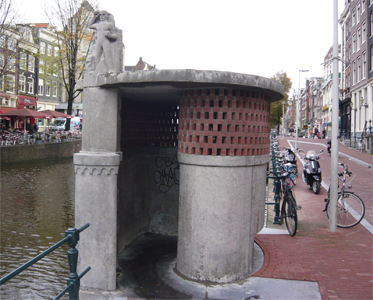 One of the many things that makes Amsterdam at least a little unusual is the fact that certain neighborhoods have quite a few free public urinals right out in the open. This began a few decades ago with typical Dutch pragmatism. Several neighborhoods, most notably the Red Light District, are filled with bars that serve more beer than anything else. On top of that, the RLD is also the stomping ground of many groups of men who are waltzing up and down the alleys admiring the window prostitutes, and of course these groups are usually free of females.

So what happens when you have a neighborhood like this that is filled most nights with groups of men staggering around full of beer? Of course, the fellas would relieve themselves against whichever wall or corner happened to be nearest, with no regard for the fact that people actually live in this neighborhood. The RLD also happens to be the most historic area in Amsterdam, and it was built mostly in the 17th Century, so you can imagine they didn’t foresee this problem in the design stage. 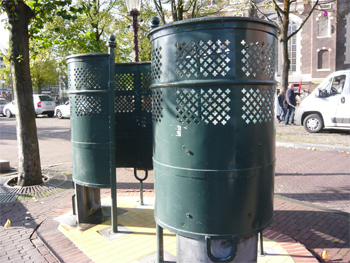 Amsterdam being the accepting city that it is was faced with at least two choices. They could hire extra police officers and have them spend all night every night writing tickets for public urination, but this would even prove difficult because the majority of these people are foreign visitors anyway. The other choice was to install free and freestanding public urinals in keys places in these busy neighborhoods.

Obviously the city chose the latter, so now men rarely have to go more than a couple blocks from their watering hole to find one of these different kinds of watering holes. These urinals are that much more welcome here, because typical of pretty much all of Europe, toilets in bars tend to be up or down narrow stairs, and they often cost up to €0.50 to use, even in places you’ve paid to enter, like nightclubs or theaters. 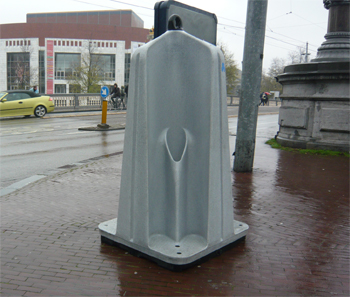 What about the ladies?

Well, as mentioned, these urinals are most common in the Red Light District, which is probably 80% or more men after 8pm or so, but there are also public urinals in other nightlife districts, and also in other random areas. It’s true that women are pretty much out of luck in most cases, but if you scan some of these photos you’ll find there are one or two models that women can, and do, use, though that’s usually only when they have plenty of mates around to keep an eye on the rest of the crowd.

The famous urinals at Schiphol Airport 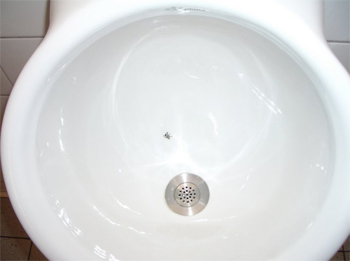 Strange that a city would have two reasons for famous urinals, but this one does. A couple years ago some genius had a theory that men would actually take the trouble of aiming their stream if they had a worthwhile target, so they literally painted what looks like a small black fly onto the porcelain. It seemed to work, and now many of the urinals throughout Schiphol have this same feature, and word is this trend in pee-related trickery has started spreading to other parts of Europe and even the rest of the world. So if you see a fly just waiting to get his due in your line of fire, don’t be too surprised if no amount of pressure from you will send him to a watery grave.