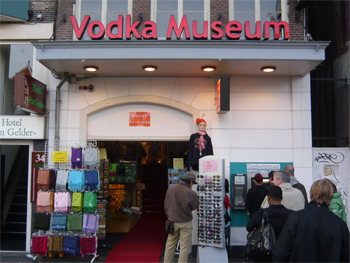 This is one of the more unusual museums in Amsterdam, but it has plenty of company for those who like oddball attractions.

Location
Damrak 33
Amsterdam 1012
It’s just a short walk straight out of Centraal Station along the main street, so it’s very easy to find.

What is in the Vodka Museum? 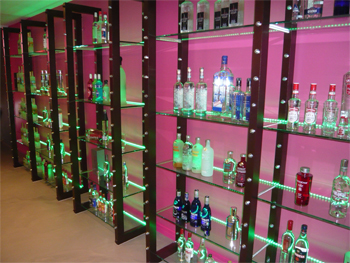 On the main levels dedicated to the museum portion, which is entered through a souvenir shop, you’ll find interesting displays that show you how vodka is made, as well as some amazingly ornate vodka bottles from Russia and elsewhere. The floor above that has displays of many of the finest and most famous vodka bottles from around the world as well as some nice vodka-themed propaganda posters.

The main attraction, however, is the top level, which consists mostly of an elaborate and modern bar that is said to have over 500 different vodkas on hand. There is also the Vodka Lounge, where you can sit in some modern chairs and watch a film about vodka. Once seated at the bar, each guest is invited to look into a camera mounted above a computer monitor, and then make a short film about his or her experience, and then evidently send the film off to their friends. This part is extremely slick, and looks like it could be a lot of fun in a group of people who are already in a good mood.

The tour part ends when you receive your free Vodka Museum gift, which will be either a small airline-size bottle of vodka, or a shot of vodka (once they have secured their license from the city to do so). One way or another, your admission fee buys you a drink of vodka and some interesting displays, so it’s not a bad deal even if you aren’t really in a museum mood.

Is it worth visiting? 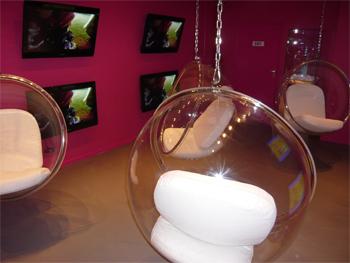 They gave me a press tour of the place just as they were opening up for the very first time, and I must say that the displays seemed a bit dry in the main part of the museum, but the part where you get to make a video and drink some vodka look like they could be really fun if your group is in the typical Amsterdam fun mode. On the other hand, if you are mostly curious about the history of vodka, as well as how it’s made, you might come away disappointed.

This is a new attraction in late 2008, and I imagine it will continue to improve as time goes on. This is, after all, the first vodka museum in Europe, so they are inventing this as they go.