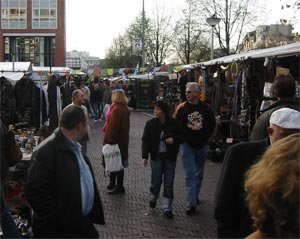 Outdoor markets seem to be gaining popularity in nearly every place that doesn’t already rely on them for its citizen’s day-to-day needs. Amsterdam has been blessed with a few for quite some time, and the most interesting one for most tourists just happens to be right in the middle of everything. The Waterlooplein (which means Waterloo square or Waterloo plaza) Flea Market is hard to miss if you’ll be spending at least two days in the city.

This market has around 300 stalls and most vendors are in the same locations every day. Unlike the Albert Cuyp Market down in the Pijp neighborhood, this market has a mix of used items, new items, junk, antiques, fashion, and nearly anything else you can imagine. Prices for many things are negotiable, but some of the stalls have fixed prices. It never hurts to ask, but this isn’t a place where you can practice your Asian-market wheeling and dealing to get things for a tiny fraction of the original asking price.

Many of the stalls have lots of small items and unusual souvenirs, so it can be worth a look for nearly everyone passing through the neighborhood. I’m not really fond of the term “people watching,” but the Waterlooplein Flea Market seems to attract more eccentric shoppers and merchants than anywhere else in the city, so it can be very entertaining even for those who have no intention to buy.

Some stalls specialize in used clothes and others do “vintage” clothes, the different usually being price and condition. Several other stalls sell only new clothes, but they tend to be of low quality. If you are looking for current fashions and decent prices it’s better to hit the Albert Cuyp Market.

The Waterlooplein Market is the best place in the city to buy smoking accessories. You can buy small pipes (sometimes known as weekenders) starting around €3 while the exact same thing is €10 in nearby headshops. You can also buy water pipes, vaporizors, marijuana grinders, and loads of other interesting items, all for rock-bottom prices. There are only a handful of stalls selling these things so the selection is far from complete, but the prices are by far the lowest.

The Waterlooplein Flea Market has dozens of stalls that sell used miscellaneous household items so the sky is the limit. You can find tools, remote controls from TVs no one would ever use, kitchen appliances, ash trays, and god knows what else.

You can also find bicycles, musical instruments, ethnic souvenirs from other areas, cheap batteries, extension cords, and, well, you get the idea.

The market surrounds the Stadhuis-Muziektheater complex, only a 3 or 4 minute walk east of Rembrandtplein, not far south of the Red Light District. The market is very easy to find since it’s mostly exposed and visible from almost all directions when you are near it.

Admission is free and there are no gates