The excellent Netherlands Tourism Board is partnering with the uber-artsy Lloyd Hotel in Amsterdam for an interesting contest that will award one winner with a free trip for two to the Dutch Capital, including three nights at the Lloyd.

The fun gimmick here is that to enter you have to offer to trade away something that is ‘dear to you,’ which would then be one of the decorations at the Lloyd Hotel. There doesn’t seem to be any guidelines beyond that, though I think it’s safe to assume they’ll reward creativity more than the value of the object you are offering.

More details on the Trade Your Way to Amsterdam contest Facebook page.

About the Lloyd Hotel in Amsterdam 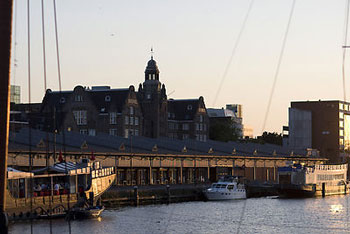 To be honest, I’d never heard of this place before this contest, though it really sounds fantastic. They have 117 rooms and each is different. That part reminds me of my favorite Amsterdam hotel, St. Christopher’s at the Winston in the Red Light District, but unlike that budget paradise, the Lloyd has rooms that run the gamut from 1 star to 5 stars.

I’m told that each room is decorated in a unique way, so it sounds like one of those classic “art hotels” that are popular in Germany. This place, however, has basic small rooms as well as large luxurious rooms, so your budget will determine the sort of room you’ll get. It sounds like the rates are determined just by the size of the room, so I’d expect the cheapest rooms to be quite small, but you can tell it’s a classy and interesting place, so they can’t be too bad.

There’s fast and free Wi-Fi plus satellite TV in every room, plus it sounds like there are many interesting social areas throughout the hotel, in addition to a restaurant, a bar, and a small convenience shop. Room rates run from €110 to €500 per night.

The location of the Lloyd Hotel sounds a bit out of the way. It’s in the new Eastern Docklands area, several hundred meters east of Centraal Station. In other words, it sounds fairly easy to reach from the train station, but it’s definitely a bit out of the way compared to most central hotels. Still, it sounds like an interesting and upcoming area, so I wouldn’t mind staying there at least once. Now all I have to do is figure out the sort of weird thing I can trade to get my free trip.