Amsterdam ArenA and how to get there 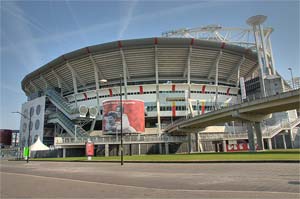 With a capacity of over 50,000 for games and certain events, the Amsterdam ArenA is by far the largest venue of its kind in the area. It hosts the home games of AFC Ajax (pronounced EYE-ax), which is the legendary and often successful club football team based in the city, and it’s also the location of some home games of the Netherlands national football squad. On the national team days the ArenA, and half the Amsterdam locals themselves, dress in bright orange to celebrate the home team with its famous color.

In addition to major sporting events, the ArenA is frequently home to major concerts and other entertainment events. In June 2008 you’ll find Celine Dion, Bon Jovi, and Bruce Springsteen on the ArenA calendar, and they are joined late in the month by the famous Dutch violinist and conductor Andre Rieu. You can keep track of entertainment events scheduled at the venue through this link to Pollstar.com.

The Amsterdam ArenA is located about 8 kilometers (5 miles) south of Centraal Station. The Heineken Music Hall is just nextdoor, as are a 14-screen movie theater complex and a large shopping center. Aside from the things just mentioned, there isn’t really anything else in this neighborhood that might interest tourists, so staying at a hotel near here isn’t recommended unless you’ve got another good reason to do so.

Getting to the Amsterdam ArenA

The great news about this otherwise-inconvenient location is that there is a Metro/subway stop here. (The Amsterdam Metro is underground in the city center, but elevated everywhere else, including the ArenA stop.) It’s officially called the Bijlmer/ArenA station, and it’s 10 stops from Centraal Station on the Yellow Line (the Red Line and Orange Line go in the same direction out of Centraal Station, but neither goes to the ArenA).

If you are staying in or near the Red Light District area the Nieuwmarkt (underground) Station is probably the closest, and if you are staying near Rembrandtplein the Waterlooplein (underground) Station is nearest. The full trip from Centraal Station to the ArenA stop only takes 15 minutes, so the other two stops are obviously a bit less than that.

This might be the only good use of the Amsterdam Metro system for tourists, and information on how to use this slightly complicated system is found on the main Amsterdam Public Transportation page. The one-way journey from Centraal Station to the Bijlmer/ArenA stop requires validating 4 strips on your strippenkaart, which is twice as many as any trip within the city center itself.

Once you get off the train you’ve still got about a 10-minute walk ahead of you to get to the ArenA itself. You’ll be going west from the station, but you don’t even have to memorize that part since if you are going just before a game or concert you’ll find that at least half the people on each carriage are headed there too. Just follow the huge crowd and you’ll be fine.

Tickets for sold-out games and events?

Of course there are box offices in front of the ArenA, but if tickets are sold out (and even sometimes when they aren’t) there will be some scalpers/resellers hanging around out front. Obviously the supply and demand ratio for each event is different, but buying tickets out front is possible and not too risky, legally speaking. And pulling off a transaction in English only is not a problem at all.