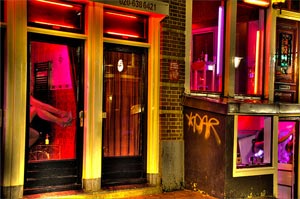 Prostitution is actually legal in many parts of Europe, but nowhere in the world is prostitution a major tourist attraction like it is here. Prostitution in Amsterdam is a curiosity for some, and one of the reasons to visit for others. The Red Light District is exactly what you probably think it is, but it’s also mostly safe and clean and should be a stop on almost every visitor’s itinerary. It’s hard to avoid, actually, being so close to the train station and in the city’s oldest and most historic neighborhood. There are quite a few other Red Light District attractions that don’t revolve around sex, but for the sexy part of this area we’ve got you covered just below.
Just for a quick orientation: Yes, prostitution is legal in the Netherlands, and in Amsterdam one of the ways to get involved is to stroll through the Red Light District. In this part of town, working girls rent small rooms with enormous windows along the canals and side streets to flirt with passers-by under the glow of what are literally red lights. Their quick and unromantic services reportedly start in the €50 range and go up from there.
>>more information on Red Light District prostitutes
Here’s a brief video tour of the Red Light District, including a chat with a former prostitute who now gives guided tours of the area:

Brothels
Those interested in participating in the prostitution scene, but who don’t want to negotiate with a girl while standing on a busy sidewalk might be happy to know there are also legal brothels here too. Only one of them is actually in the Red Light District, but the others aren’t too far away. In the Netherlands these places are called privehuizen, which means private houses. They are low-key brothels, mostly in residential neighborhoods, and they usually charge by the hour instead of for a quickie, and the hourly price is surprisingly low.
>>more information on brothels in Amsterdam
Sex clubs
There are no sex clubs located directly in the Red Light District, but these notorious places are strongly associated with the RLD scene. The sex clubs work in a similar way to the private-house brothels, but instead of a discreet lounge and waiting area, customers mix with each other and the girls in a bar setting. There are a few things to be cautious of with these sex clubs, so do a bit of research before you rush on over.
>>more information on Amsterdam sex clubs
Live sex shows
If you’re in the mood, there are also three clubs with live sex shows mixed in between some of the regular businesses. This is the most liberal part of a liberal country so these things don’t phase the locals. The sex clubs here are almost as famous as the girls in the windows, and for a hefty admission price a visitor can witness things they could only imagine seeing in most other cities on earth. This sort of erotic entertainment is particularly big with groups of young European men on weekend bachelor parties. As racy as things get inside the clubs, there is nothing terribly offensive on the outside so passing out front is not risky.
>>more information on live sex shows in Amsterdam
Not just prostitutes
But there is no need to feel like a pervert if you want to stroll through the area. The Red Light District is also home to many bars, restaurants, night clubs, coffeeshops, hotels, and hostels so there is much more going on than just a bit of prostitution. As you might expect, this is the wild part of town, but there are also famous churches, a farmers market, and homes of thousands of residents. Check out the other attractions in the Red Light District, as several of them involve things other than sex or drugs.
There is no need to feel any shame walking through this area, and in fact, you’ll likely be weaving your way through groups of locals and even groups of elderly tourists of both sexes as well. Everyone, except perhaps young children, can visit the Red Light District when in Amsterdam without feeling embarrassed.
A few cautions
There are some warnings about this area though. You’ll notice groups of police officers in the area nearly every minute of every day, but unfortunately this area still has a bit of a crime problem. Bicycles get stolen all over town and this is where the thieves often go to sell them for a quick €20. If someone approaches you with a bike for sale here there is a 100% chance it’s recently been stolen and also your money will soon be used to buy hard drugs for the thief.
And speaking of hard drugs, depending on what you look like, you might have questionable characters offering to sell you cocaine or heroine or other hard drugs as you pass near them. As tempting as this may be to some people, you’ll never actually get what they are promising, so trying to buy hard drugs here is a terrible idea in every way.
The Red Light District will be shrinking
In September 2007 the city of Amsterdam announced it had struck a deal to buy 18 buildings that are home to 51 windows, which is about a third of the current total. The windows will be turned into new shops and residences as a way to help weed out some of the criminal elements in the neighborhood.
Now that you know you are definitely coming:
>>Look for cheap Amsterdam airfare
>>Look for cheap hotels in Amsterdam
>>Look for an Amsterdam hostel
More news on the Red Light District getting smaller
In December 2007, the city announced plans for shutting down many of the sex-related businesses as well as bars and hotels in the Red Light District. Look here for the full story on Amsterdam’s Red Light District being scaled down.
Return to the WhyGo Amsterdam home page to see the latest Amsterdam articles.