Amsterdam Botel has moved to what sounds like a cool spot 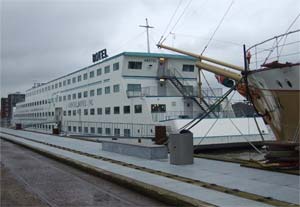 I’ve not mentioned this thing before, and I’ve not yet been aboard it, but I did think it was worth mentioning that Amsterdam’s famous Botel moved locations at the beginning of 2008. The new location sounds very interesting, although it’s now a bit more of a challenge to get there and back.

In case you’ve not heard of it, this is a 175-room boat that had been permanently docked along the River Ij, just a short walk east of Centraal Station. Every room has en-suite facilities and a TV, so it’s definitely not near the bottom of the Amsterdam luxury scale. The 2008 prices for a single room start at €78, including breakfast buffet, so it’s also not the cheapest hotel in the city, but triple rooms start as low as €108, which is quite a good deal if you are traveling with 2 friends or like to bring stray people back to your room with you.

I never even visited the Amsterdam Botel in its old location because it looked like a 5 to 10-minute walk in a direction I never wanted to go in, just north of the Red Light District along the mighty Ij river that cuts through the city. And I’m not sure exactly why they moved, but the new neighborhood sounds interesting. When I lived in Amsterdam I was hearing people telling me the part of the city just north of the river is up and coming, and based on this I think there is something to that.

The new location is very close to the old location, just on the other side of the river. It’s now at the former NDSM-shipyard in Amsterdam North, at the NDSM-Pier 3, 1033 RG Amsterdam. Their own description of the neighborhood says, “This colourful and vital dockside area now houses workshops and artists’ studios, hip cafes and restaurants, exhibitions and performances. Among others the media wharf houses MTV, Robodock, and the IJ-festival”.

This actually sounds very appealing to me. I love the touristy part of Amsterdam, but it might also be fun to be able to escape it in only a few minutes. This sounds like a newly gentrified area where I might expect to see hip locals all wearing those cool eyeglasses that artsy German people all wear.

This is a dead time of year already in Amsterdam, so perhaps combined with their recent move they decided on this promotion to help fill the thing up. Through the end of February 2008, and perhaps even longer, they are offering a double room for €59, with a free welcome drink at the “hotelbar” thrown in, and also free entrance to the Holland Casino, which is near Leidseplein and is not too popular with the backpacking set. I’m a sucker for a free welcome drink myself. Why do they always taste better than normal drinks? I guess we’ll leave that to our esteemed scientists to sort out in future generations.

Getting there and back

It’s a shame that this boat is so close you could probably throw a rock through one of its portholes if you were standing behind Centraal Station, but since it’s across the river you need to take one of two special methods, both of which are free. During the day there is a free ferry that operates frequently from behind Centraal Station to get residents of North Amsterdam home. And the ferry evidently docks just next to the Botel, so it’s pretty convenient.

At night you can take the free Amstel Botel Shuttle Bus straight from the front of Centraal Station to the Botel itself. I’m not sure of the frequency, but I’d imagine with that many rooms this thing must go fairly often.

>>more information on hotels in Amsterdam