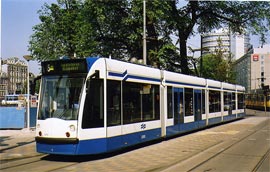 In spite of its outsized fame, Amsterdam is actually a fairly compact city, at least when considering the town center that contains pretty much everything you’ve ever heard of or would want to see on a short visit. Since most visitors come for just a weekend in Amsterdam, it’s nice that there are a few ways to get a worthwhile orientation in a hurry. Many visitors come through on an Amsterdam layover at Schiphol of between 4 and 10 hours, and it’s nice to know that you can not only make a visit to the city but also have a fairly meaningful tour in that short of time. Check out the Amsterdam layover guide for specifics on how to maximize your time and everything you need to know.

Most of us recommend an Amsterdam canal tour as the first thing to do when you arrive, regardless of how long you’ll stay, but those one-hour cruises cost around €10 so those on the tightest of budgets might be tempted to skip it. Cheapskates who don’t want to just wander around aimlessly now have another choice, which is the #5 Tram Tour with a free downloadable audio commentary produced and offered by the GVB, which is the Amsterdam public transportation company.

The #5 Tram Route isn’t actually ideally suited to this sort of thing, but the GVB chose it as the best option for newcomers. Many cities have one specific public transportation route that does a nice loop of tourist attractions around the center, but this one doesn’t. The #5 does the best job it can, although it actually goes well into the southern suburbs, so you are better off alighting at one of the stops long before you reach the end of the line. You can then cross the street and get back on the thing heading back to Centraal Station without having to pay again, as long as you are within two hours of when you validated your ticket.

If you go to this link on the GVB site, which is within their fairly helpful Tourist Guide section, you can download what they call a “podcast” even though it’s just a single mp3. You can, of course, load it onto an iPod or any other device that will play mp3s and follow along with this American expat who describes the journey in a style that many will find entertaining and even funny at times. He has obviously lived in Amsterdam for a while, and he knows his stuff well. There are enough interesting things contained on the thing that it could well be worth listening to at home just for laughs, especially since it’s free and all. My guess is that he’s from the Boom Chicago show in Leidseplein, which is a long-running English-language comedy show that generally gets rave reviews.

You’ll find there are two different “podcasts” you can download, and this is a bit confusing on the site. The first one is 36 minutes long and begins just after you enter the main hall at Centraal Station (after having gotten off a train from the airport or from some other city). The first 6 minutes are taken up with general information and then advice on how to buy a 24, 48, 72, or 96-hour transportation pass for your tram tour. You might want to get one of these day passes, but you don’t actually need one. Check out the main Amsterdam public transportation page for specifics on what you might want and how to go about getting a ticket and boarding the tram and such. The real cheapskate tip is to just buy a single-ride pass from the ticket guy on the tram for €1.60, or buy a strip ticket for €6.90, which could be used for 7 journeys, or 7 people on 1 journey, or any combination thereof.

The second “podcast” on the download page is the exact same thing, but it starts 6 minutes later, just as you are boarding the #5 tram itself. If you know how to find the tram in front of Centraal Station and buy a ticket you can download the second one, but there’s no need to download them both.

The #5 Tram Tour takes you down the Damrak street, through Dam Square, the Spui area, along Leidsestraat, through Leidseplein, past the Rijksmuseum, Museumplein, the Van Gogh Museum, PC Hoofstraat, Vondelpark, the Amsterdam Hilton, and then into the suburbs in the south of the city. Strangely enough, the guy giving the audio tour never really mentions that you should probably get off the tram and head back the other way until well into his routine, and then he starts playfully asking “why are you still on this tram?” as if newcomers should have known on their own that they were heading deep into boring suburbs.

Nevertheless, this #5 Tram Tour does give new arrivals a good look at many of Amsterdam’s most interesting attractions, all in the first 20 minutes or so after leaving Centraal Station. If you are cheap and in a hurry this is probably better than just roaming around the hectic area just in front of the train station with no plan in mind. It’s not as good as one of the canal tours, but it can be done in about 45 minutes round trip, and for €1.60 total, so that’s not bad at all. I really commend the GVB for offering this audio tour, and I found it very informative even as someone who’s lived in Amsterdam on and off for a while now.

Map of the #5 tram route