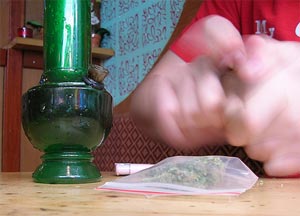 Any chance of finding a bong or water pipe to use?

Yes. Most coffeeshops actually have a small selection of bongs, which are available for free use by their customers. Most places ask you to leave a driver’s license or some other collateral that prevents you from walking off with the thing, but aside from that they are free to use while you are there. Some places have just a couple of bongs, and other places have a dozen or more.

Strangely enough, not many people actually take advantage of these house bongs. It could be that many people don’t know they are there and free to use, or perhaps some people have hygiene concerns over putting their lips in or on a public device.

If you are a bong smoker at home, don’t feel shy about asking about the house bongs, even if you also ask for a napkin to wipe the thing down completely before you use it. 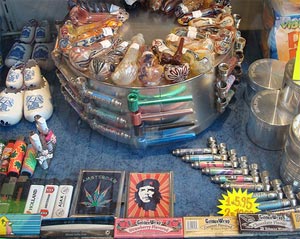 What about small and simple portable pipes?

For those who aren’t fans of either style of joint, and who also want to be able to smoke anywhere outside of coffeshops, a small and simple pipe is a must-have. Some people call these small pipes ‘weekenders’ because people often buy them when they arrive on a Friday and have to leave them behind when they leave on Sunday. Of course, an obvious complication is that if you are leaving through the airport or crossing any international borders, having a pipe with cannabis residue still on it with you is a terrible idea. It’s rare, but sometimes there are checks on international trains that began their journey in the Netherlands. Just look for the cheapest one that you like the feel of, and plan on giving or throwing it away before you leave. 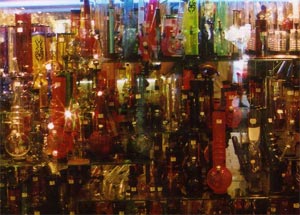 There are quite a few small stores that sell smoking accessories (often called ‘head shops’) in Amsterdam, and most of these stores don’t sell much else, aside from some goofy souvenirs. Most of them are in or near the Red Light District, although a few can be found in other tourist neighborhoods in Amsterdam. Small pipes usually start at a shockingly-high €10 or so, and go all the way up to €50 or more for fine glass pipes and other well-crafted pieces. If you want one to leave the country with, these might be fine, but it’s probably best to not use it before crossing the border or heading to the airport.

My best advice on this topic is to head straight to the Waterlooplein flea market as soon as you arrive in the city. It’s open from around 9am to 5pm Mondays through Saturdays (closed Sundays) and it’s easy to find and very convenient if you are staying near or passing Rembrandtplein. At the flea market there are always at least 3 or 4 stalls that have a good selection of pipes along with other smoking accessories. The exact same pipe that goes for €10 in a nearby head shop can be had for around €3 at the flea market, and slightly nicer ones are only a bit more expensive. Throwing a €10 pipe in the trash after two day’s use can sting a little, but throwing away a €3 pipe can be pretty painless.

If you know what a vaporizer is, you are a pretty advanced smoker (for better or worse). Actually, many coffeeshops do have a vaporizer for free use by their customers. The ones that do are usually the coffeeshops that are known for selling quality weed, rather than the big places right on the main tourist route.

The excellent Amsterdam Coffeeshop Directory notes which shops have vaporizers, although that site does have a tendency to get out of date.

If you don’t know what a vaporizer is, this information might be a bit surprising. Vaporizers are fairly new on the scene, but some people swear by them. They are devices that heat weed or hash to a point just short of burning it, and a bag or glass chamber collects the vapor before the smoker eventually sucks it into his lungs. The vapor does get a light smoky look to it so you can easily see what you are inhaling, but it’s not as dense as smoke in a bong.

This process releases most of the THC in the cannabis without creating harsh smoke, so the user can get quite high with far less punishment on his or her lungs. The vapor has quite a pleasant minty taste that is very different from weed smoke. The high is noticeably different as well. It tends to take longer to hit the user, and the resulting buzz is more similar to the ‘full-body-high’ people get after eating space cakes or brownies. 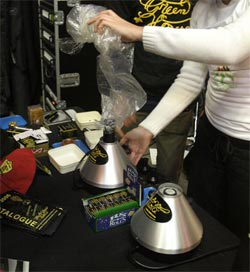 The Rolls Royce of vaporizers is a model called The Volcano, which costs around €320, and is quite large. Interestingly enough, most of the coffeeshops that have vaporizers for public use have these Volcanos. I have a feeling the company has given them to the shops, or sold them at a heavy discount, in order to encourage patrons to buy their own.

But if you like the idea of a vaporizer, you don’t have to spend a small fortune. Most of the head shops in Amsterdam sell smaller models that do more or less the same thing starting around €80 or so. You can find them online as well, and there are many models to choose from in all price categories. People who are serious about this almost all tend to go with the Volcano, which is by far the best. Some of the cheaper ones just toast the weed or hash rather than turning it to vapor, and if yours ends up doing this you probably won’t use it after a few times anyway.

Recent studies that show there is no real link between cannabis smoking and cancer have made vaporizers seem less necessary, but obviously holding hot smoke of any kind in your lungs can’t be good for you, so trying a vaporizer is still worthwhile if you are serious about cannabis at all.