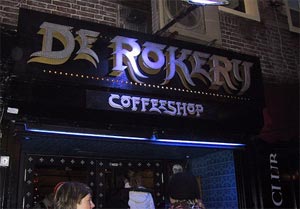 Below is a general introduction to the coffee shops in Amsterdam. For a far more in-depth look at this fascinating subject, please check out our Amsterdam coffee shops FAQ section, which will tell you everything you need to know about how things work in these shops, as well as several other specialty topics that relate to the general coffeeshop scene.
Some of the topics covered in the Amsterdam Coffeeshops FAQ are:

But there is much, much more in addition to those topics, and many photos that help explain everything in great detail.
Introduction
The coffeeshops (almost always written as one word) in Amsterdam are the infamous brother to the Red Light District. Amsterdam is a gorgeous city filled with amazing architecture and museums and history, but it’s the twin draw of cannabis and prostitutes that make this such a mysterious and magical city to many of its visitors.
Yes, you can stroll into a “coffeeshop” in Amsterdam and legally buy a small quantity of marijuana or hash, along with your coffee or juice, and smoke it right there in the shop or at the tables out front. The quality is high and the prices are low, relatively speaking. You can buy pre-rolled joints if you like, or roll your own with the free rolling papers provided. You can bring in a portable pipe or borrow one of the bongs from the coffeeshop itself. Many shops also sell spacecakes, which are variations of pot brownies that most people are familiar with.
>>more information on space cakes in Amsterdam
There are about 150 coffeeshops in Amsterdam, with the greatest concentration in the area near Centraal Station and the Red Light District, but there are shops all over the city including in residential neighborhoods you’ll likely never see.
Finding the coffeeshops

Finding the “coffeeshops” is almost always easy. The names and decorations are usually a giveaway and if there is some small doubt in your mind you can scan for the green and white flag symbol out front that says coffee shop on it. The only confusion you might encounter is if you come across one of the city’s famous “brown cafes.” These are like corner pubs and even though the “brown” part of the name comes from the smoke-stained walls, these places don’t sell weed and would be very offended if you tried to smoke in them.
Be sure to check out Amsterdamlogue’s Top 5 Coffeeshops.
Others things you should be aware of
First, even though Amsterdam is known as the pot capital of the world, it doesn’t mean that you can smoke just anywhere. Actually, visitors are quite restricted in this regard. Really the ONLY places you can smoke cannabis are in the coffeeshops and in your hotel room as long as it’s not designated as no smoking.
If you smoke in a park or just walking along the street you’ll be looked down upon by locals and if you’re spotted (or sniffed out) by the police you’ll probably be sternly asked to knock it off. The risk of being arrested is almost zero, but it’s important for people to be good citizens if the Dutch are going to continue to tolerate stoned visitors.
Smoking weed in bars is usually not tolerated either. Especially as the night goes on, some places might turn a blind eye to this, but before the wee hours you’ll almost always be asked to put it out right away. Nightclubs, whether they be for dancing or for live music, are usually okay with weed smoking, but some of the more posh places might take offense so look around before you light up.
Since April 1, 2007, they have banned the sale of alcohol in the 50 or so coffeeshops that used to serve booze in addition to cannabis, so a few new smoke-friendly bars have popped up around the city. Many of them are next to coffeeshops and a few are owned by the same people. Ask the people in the coffeeshop where the closest smoke-friendly bar is and you’ll usually only have to go a block or so. The complete banning of smoking in bars is scheduled for July 1, 2008, so we can assume that combining the hobbies of drinking and weed-smoking will be nearly impossible in public places after that, much to our dismay.
Cannabis Museum
Amsterdam is home to the world’s only hash and marijuana-themed museum, and it’s located in a nice part of the Red Light District. For real potheads, this place is cooler than you might expect as long as you know what you are doing.
>>more information on the Hash, Marijuana, and Hemp Museum
Again, everything here is covered in much greater details in the large Amsterdam Coffeeshops FAQ section.
For a well-written blog on marijuana in general, check out thestraighttoke.
Now that you know you are definitely coming:
>>Look for cheap Amsterdam airfare
>>Look for cheap Amsterdam hotels
>>Look for Amsterdam hostels
[display_feed=https://www.amsterdamlogue.com/tag/coffee-shops/feed;title=Recent articles about coffeeshops;items=10]