Buying marijuana or hash in a coffeeshop – Amsterdam coffeeshops FAQ 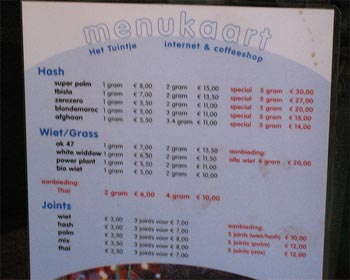 How do I go about buying marijuana or hashish once inside?

Okay, this is the most intimidating part for the first-time visitor. The coffeeshops aren’t allowed to advertise the cannabis outside or even inside the shops. You almost always have to ask to see the menu, although a few places do shun the law and have the menu posted on a chalkboard or something like that.

This seems really weird at first, or like something out of some ridiculous movie, but just go up to the person at the counter and casually ask to see the menu and they’ll know exactly what you are talking about. You’ll likely be handed or shown a laminated card with all the types of marijuana and hashish on it alongside the price for each.

How much does the weed and hash cost?

Almost every coffeeshop sells their marijuana and hashish by the gram, each with a different price. In almost all cases, the more expensive the cannabis is, the stronger it is. Prices tend to range between €7 and €12 per gram, and if you don’t know what a gram looks like, it’s actually quite a bit of marijuana (although hashish is much smaller). Recently some of the most potent strains at the best shops have gone up to €13 or even a bit more per gram.

And if you don’t know what a gram looks like, it probably means you aren’t a heavy smoker, which means that you could probably get plenty high between 6 and 8 times from a single gram. Everyone rolls joints in different sizes, but most people can get 2 or 3 nice joints out of a gram of marijuana.

Can I buy in bulk, and save money doing so?

Not really. The few regulations Amsterdam does strictly enforce are that you have to be 18 years or older, and a shop can only sell up to 5 grams to a customer in one day. Five grams is about a sixth of an ounce, and enough to roll 10 to 15 normal-size joints, so it’s quite a bit more than anyone other than Snoop Dogg could ever hope to smoke in a day. This law is obviously in existence specifically to prevent people from buying in bulk for export. If you were intent on trying this you could conceivably buy 5 grams each from multiple shops, but it won’t be cheap this way, and trying to export it can be extremely risky.

You can find modest bulk discounts at some shops, but never significant enough to go out of your way for. Most every place prices their weed and hash in 1-gram increments, and multiple grams tend to be just that same price multiplied by up to five. A few places have special prices for 2, 2.5, or 5 grams, but don’t expect to save much. A shop might offer 1 gram at €11 and 2 grams for €21, or a similarly disappointing discount.

Most visitors come to Amsterdam for only 2 or 3 days, so having the opposite problem is more typical. Enthusiasts usually love to try as many strains as they can during their stay, so having to buy a full gram of each one is a bit of a burden if you want to try several varieties on one short trip.

What else do coffeeshops sell? 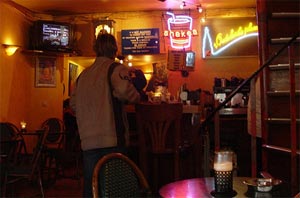 Some also sell cannabis in an edible form. They are best known as pot brownies elsewhere, but in Amsterdam they are usually called “space cakes” or “space cookies” etc., and they are covered in their own topic in this guide.

All coffeeshops also sell coffee, although it’s almost always espresso or cappuccino rather than large steaming cups of American-style brew. Prices tend to be quite reasonable, usually between €1.60 and €2.50 for all hot drinks. They all sell juice as well, usually in small bottles. Most places also offer tea, with flavored teas (like mango) being very popular. The customers are mostly stoners so sweet and exotic things are big hits here, and a few places are really well known for milkshakes. Of course they also carry sodas and water as well.

A few places also sell food like sandwiches, soups and the like. You don’t see many people getting their meals in the coffeeshops, but it can be done in selected places.