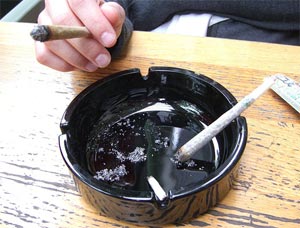 Do most people smoke joints in coffeeshops?

Yes, although this is probably a bigger subject than you realized. Most locals and visitors from elsewhere in Europe smoke one kind of joint and visitors from North America and most of the rest of the world smoke a completely different kind of joint. It’s interesting that this rule applies nearly 100% of the time so the crowd is usually very easy to sort out just by looking at their joints.

European-style joints – These “Euro-joints” (sometimes called “spliffs”) are usually much larger than the other style, and are mixed with more tobacco than cannabis. They are cone-shaped and the pointy end is completed with what is they call a “tip.” Usually a cigarette or two are broken up and that tobacco is combined with weed or hash to create the Euro-joint.

Rest of the world-style joints – These “skinny-joints” always consist of weed rather than hash, and nothing else is mixed in. They are typically long and thin, and no tip is used. When the joint gets down near the end, what’s left is referred to as a roach, which becomes very tricky to finish off completely. 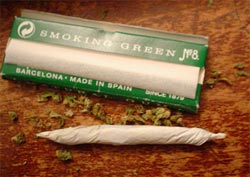 Why are these styles so different?

No one really knows for sure, but I have my own theory (as a North American). For most of the past few decades, most of the cannabis in Europe has been in the form of hashish, often imported from Morocco. When all you have is hash, your options are limited to using a pipe of some kind, or adding the hash to something that enables you to roll it into a cigarette. More young people smoke tobacco in Europe than in North America, so the cigarette option is the natural way to go. So even as indoor growing operations have led to excellent fresh weed becoming available in Europe, the style was already too firmly entrenched.

And since hash has always been somewhat rare in North America (and most other places), there was little motivation to go the tobacco-mix route. Joints made of dry Mexican dirt weed can get you stoned, but joints made of fresh, high quality weed can be heavenly to the true skinny-joint connoisseur.

Is the smoking experience the same with both types of joints? 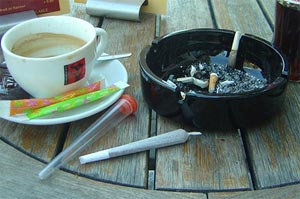 Not at all. The European style is like mixing vodka with orange juice, and of course the taste of the orange juice dominates, just as the taste of the tobacco dominates the taste of a Euro-joint. So the experience is similar to smoking spiked cigarettes until you and your pals eventually get high. Europeans insist this style is more social than the other style, and it’s hard to disagree with that part.

It’s actually a bit challenging for most people to try the method they aren’t used to. The holding-in technique is just as tough for a European as it was for you when you first started, if you are a skinny-joint smoker. And those not used to Euro-joints are almost always tempted to hold the smoke in lungs, per their normal style, which results in a ton of hot cigarette smoke burning the chest cavity, almost always producing massive coughing spasms that, unlike the skinny-joints, don’t help get you high. This helps explain why people tend to stick to the method they began with.

I’m terrible at rolling joints, can I get help? 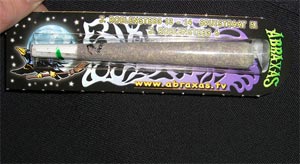 Yes, you can. Many places sell pre-rolled joints, which are almost always in the Euro-joint style, though since the no-smoking law kicked in the pure style is easier to find. See the pros and cons of these above so you’ll be ready to try them. North Americans make up a big portion of visitors to Amsterdam, so the coffeeshops are very well aware of the different styles in joints. Some places sell pre-rolled skinny-joints, and some places will roll a skinny-joint for you. If they do this for free it’s not a bad idea to tip them a Euro or so as a reward because this isn’t something they are required to do.

Where do I find rolling papers?

Good news on this one. Every coffeeshop gives out free rolling papers with little discretion. When bought in bulk, they cost almost nothing, so most places have loose rolling papers in jars on the counter, or sometimes in packs that are anchored to something in the shop. You can grab a couple free rolling papers from their stash, even if you bring your own weed in and are just ordering coffee from them. But if you want more than one or two you can buy a pack of them from many coffeeshops and even tobacco shops, news dealers, and head shops in Amsterdam.

Papers used for Euro-joints are the large size, and those are most common in the coffeeshops. If you know how to roll a skinny-joint, you can easily alter the size of the rolling paper to meet your needs.

Those tips or handles are also available for free in some abundance from every coffeeshop. They are usually on the counter, so you can just grab what you need without even asking.