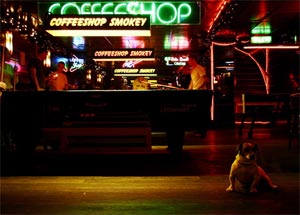 What about Amsterdam’s new no-smoking law?

Yeah, that’s a bummer. As of July 1, 2008, cigarette smoking has been banned in all public places where people work. It had already banned on a voluntary basis by most hotels and other public places, but the bars remained smoky through June, 2008. This means all the former “smokers’ bars” had to stop that since they can’t allow pot smoking there after cigarette smoking is banned. We’ll see what happens, but people will probably be smoking cigarettes out front, just as they do everywhere else in the world smoking has been banned indoors. Whether pot smokers will be tolerated in front of bars is unknown at this point.

Well over half of the coffeeshops in Amsterdam have installed a glass partition or sectioned an upstairs area off where tobacco can still be smoked, so most things continue just as they did before the ban.

Has the no-smoking law closed any the coffeeshops themselves? 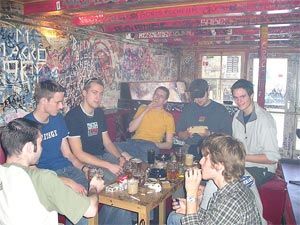 No, fortunately. Several government officials have addressed this and have said they have no intention of using this new law to close the coffeeshops, but at the same time there is no guarantee the coffeeshops will be this way forever. The city frequently acknowledges that they think having the coffeeshops does more good than harm, but on the other hand they have tightened restrictions on them a few times in recent years. And the planned major clean-up of the Red Light District will certainly end up shutting the doors of at least a few shops in that area over the next few years.

But with regard to the July 2008 no-smoking law, since these coffeeshops exist as places where people go to smoke, officials are less concerned about a minority of smokers affecting a majority non-smokers, which is the case everywhere else. The law states that employees must be able to work in a smoke-free zone, but this only applies to tobacco smoke and not cannabis smoke. As long as customers don’t mix tobacco in with their weed or hash in the main work area, the employees don’t have to be “protected” from the smoke.

The smoking ban strictly applies to tobacco, so the ability to smoke a euro-joint in some coffeeshops is gone, but generally speaking pure cannabis smoking carries on just as before. And as mentioned above, most places have a separate part of the shop where tobacco is allowed, so not much has really changed.

If you aren’t from Europe you might not be aware that joints in Amsterdam consist of weed or hash mixed with tobacco when rolled by a European. People from the rest of the world typically roll joints made only of weed, and since the no-smoking law has kicked in there seems to be some evidence that some Europeans are switching to pure joints, but the majority of them carry on mixing with tobacco.

The tobacco smoking ban is now in place, but strangely the situation isn’t completely clear yet. The main issue has to do with enforcement. We must occasionally remind ourselves that buying and smoking cannabis is still technically illegal in the Netherlands, and this is just a pragmatic tolerance program that the government feels does more good than harm. The government has clearly stated that they don’t plan on using this tobacco law to close coffeeshops, nor do they plan on harassing shops more than other businesses. Since the whole situation is at least a little ridiculous on the surface, most shops are taking a wait-and-see approach rather than drastically changing their operation to prevent something that might never happen anyway.

In the meantime, more shops are providing vaporizers and pipes for their customers.

Stay tuned and we’ll update this page as new information is available.