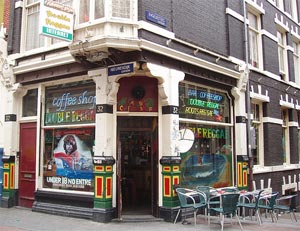 Can I buy weed one place and smoke it in another coffeeshop?

Yes, definitely. The only trick here is that it’s customary to order something, like coffee or tea, while you are using up some of their space. As long as you do that it’s perfectly acceptable to bring your own stash in and smoke it in a different coffeeshop. You can even grab the free rolling papers or ask to use one of their water pipes as long as you order something soon after entering. Going on a coffeeshop-crawl is one of the great joys of visiting Amsterdam, so by all means, move around all you want.

Can I smoke weed elsewhere in Amsterdam?

Yes, but it’s more restricted than some people would guess before they get here the first time. Basically, you can’t or shouldn’t smoke anywhere outside of the coffeeshops, but with a few exceptions:

Many hotels and hostels have no-smoking rooms or are no-smoking altogether. If you want to smoke in your room be sure to book into a place that allows it. Since this is such a common issue in Amsterdam, nearly all places that ban smoking will make a big deal of it as part of their listing on whatever website you book with. If smoking isn’t mentioned then chances are it will be fine, but only inside your room with the door closed. More and more hotels are now completely no-smoking all the way, but this is meant mostly for tobacco smoking. If you want to smoke a pure joint in your room, and you open the window, chances are you’ll be okay. The problem is that some hotels are arranged in such a way that they’ll smell the smoke anyway, and might knock at your door pretty upset at you. They won’t call the police, of course, but they might yell and you and possibly even throw you out of the hotel.

Not long ago Amsterdam had what they called “smoker’s bars” where weed smoking was totally acceptable alongside tobacco smoking, but since the 2008 no-smoking law kicked in July 1, those are pretty much gone.

This is Amsterdam though, and it’s a city where not everyone follows the rules strictly. You can actually find a fair amount of bars, especially in the Red Light District, that still allow smoking and weed smoking. One or two of them have asked for an added donation to build a fund for if and when they get fined, but several others just allow it with no qualifications. I hesitate to name names here, but Green House Effect on Warmeosstraat is such a place that allows any kind of smoking (except probably crack smoking), and it’s a really cool place as well. 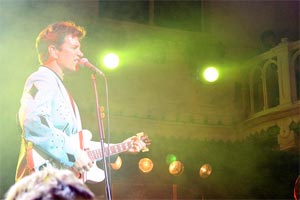 You can usually get away with smoking a bit discreetly in these places, but it depends on the individual place. You should be fine at a big concert or a big nightclub like Melkweg or Paradiso, but a smaller or more posh place might ask you to stop. Just look around to see if anyone else is doing it before you light up. There will be a majority of locals at all of these kinds of places, so if it’s okay you’ll probably smell it before you can see it.

Out on the street

You can definitely smoke while walking around town, but people will look down upon you and if a policeman sees you they will probably tell you to put it out and never do it again. You won’t be arrested, but you’ll be embarrassed, and doing this really disrespects your otherwise-tolerant hosts. But walking around the empty streets late at night you should be okay if you can’t wait until you get to the next place. 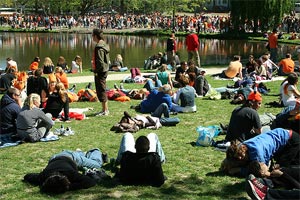 Vondelpark in particular is huge and often filled with people relaxing anyway they can if the weather is good. As long as you aren’t upwind of other people you should be okay, but this is like the topic just above. You can do it, but be courteous and keep to yourself if you smoke. If you see children in the area then don’t do it at all. If it’s only adults and no one is too close, then you’ll be fine.