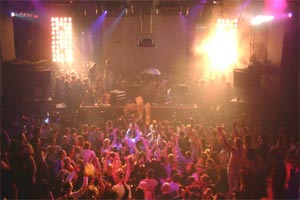 For three days every year in mid October, Amsterdam hosts the premiere event for the dance music community. You could argue that Miami’s Winter Music Conference in March is bigger and the better party, and you’d be right about both those things, but as someone who has attended both at least three times and has observed which way the wind is blowing, the Amsterdam Dance Event (ADE) is a far better event for the professionals.

Actually, there are two distinct aspects to the ADE, one is the conference during the day and the other is the festival at night. The conference costs €275 and is attended by around 2,000 music professionals each year. The festival is held at most every club in town and, while the conference delegates do attend, the festival attracts many thousands of dance music enthusiasts from around the world.

Held for three days at the Felix Mauritus Center (near the Anne Frank House), every record company person in Europe and most of the rest of the world comes together with established and upcoming producers, DJs, and other artists. Anyone who’s been to the Winter Music Conference knows the daytime events are a joke, and nearly anyone of any importance spends their days sleeping and/or by the pool. Sure, that’s a great party, but not much of a conference.

Here the panels actually mean something and the top people almost always participate. Since dance music is declining to the point of almost extinction in the United States, this conference has even greater importance because dance music never goes out of style in Europe. And when I refer to dance music, I’m talking about house, trance, drum & bass, techno, hardcore, and all of their many variations. In recent years, particularly in the States, young people think of hip-hop and r&b as dance music, but those are barely a blip in Europe, at least on the homegrown side.

Recently the organizers have added a new mini-conference on Saturday called D3. It’s held mostly in Dutch, unlike the main event which is almost entirely in English. Tickets are €15 and it’s meant for younger producers and DJs to get involved in an affordable way so they can interact with the pros and hopefully be ready for the main ADE event soon.

The festival part lasts for five days, with parties taking over every club in the city. Over 40 venues are involved and the parties range from huge to intimate, but everyone is putting their best foot forward so the line-ups are almost all stellar. The paid delegates who attend the conference get into all the parties for free, which almost justifies the price on its own, but the non-delegates can buy tickets to each event directly from the club where the party is held.

Obviously, the top acts in the big clubs are expensive and sell out early, so you have to be prepared. If you just arrive in the middle of the evening the place might be full or they might tell you it’s “members only.” If you’ve got your eye on something in particular you should really arrange tickets in advance.

The hotels in the city do book up early for the ADE, but no worse than a normal summer weekend. You can usually find a hotel at the last minute, but it might be expensive and not your first choice.