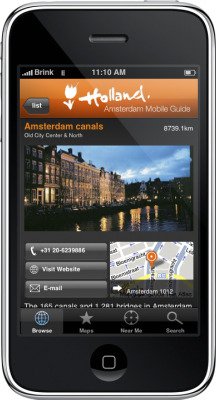 Some people love detaching from modern life as much as possible when they travel. I am not one of those people. I’m quite content to leave some tech toys behind when I go on vacation, but I also love some of the new technology that makes travel easier. One of the most ubiquitous tech tools – that’s also a great travel tool – is the iPhone.

There are a gazillion apps in the iTunes app store (and yes, I counted), with more being added every day – and the good news for travelers is that there are loads of useful iPhone apps for just about any destination you’re going to. Some places have more iPhone apps than others, but Amsterdam has enough appeal that there’s a variety of great Amsterdam iPhone apps.

This is by no means an exhaustive list of iPhone apps for Amsterdam, but it’s a selection of some of the apps I thought were most interesting, useful, or just plain fun. And if you (like me) don’t have an iPhone but have an iPod Touch instead, you’ll need to read the details on each app to make absolutely sure it’ll work on the iPod Touch as well as the iPhone. (Most apps do, but some don’t.)

As mentioned, the iPhone app store is growing every day, so if your favorite Amsterdam iPhone app isn’t listed here, please let us know what it is in the comments section.