Amsterdam is NOT closing down all the brothels and coffee shops

On December 6, 2008, the City of Amsterdam announced an ambitious plan that will end up closing down a number of businesses in its infamous Red Light District. Since this is a sexy and controversial story, news outlets around the world picked up on it, and most of them blew it out of proportion. For the most part, this announcement is identical to one they made about a year ago. The bottom line is this is part of a 10-year plan the city is working on to clean most of the “criminal elements” out of the city center, and restore a bit of balance to the tourism options in the Red Light District.

In case you haven’t yet been here, or you don’t follow these announcements very closely, I’ll summarize the facts of the recent announcements and other developments below.

The target of this plan is organized crime, not the sex or ‘soft drug’ trades

The city seems to have evidence that many of these businesses are being used for money laundering and even extortion, so if they can close down a few of the worst places, then what’s left should be even nicer. There is also the always-present issue of human trafficking, and if some of the windows are often being used by women who came in illegally or against their will, then taking steps to shut that down is welcome as well.

Amsterdam is not actually targeting the real brothels 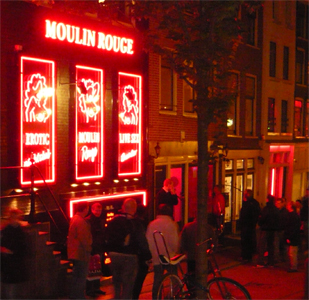 From everything we’ve seen, it appears the city plans on closing down some more of the red-lit windows for the reasons stated above, but isn’t targeting the actual Amsterdam brothels at all. The windows are considered “brothels” by some people, but they should not be confused with the real thing. In almost every case, the individual prostitute rents out the small room behind the window for an 8-hour shift. The fee they pay helps pay for security in the area, but aside from that they work independently.

There are also 8 or so ‘private house’ brothels that work in a completely different way. None of these businesses is located in the Red Light District, and as far as we can tell, none of them is in any danger of being closed. At the private house brothels, the customer is led into a private room, after which all the girls on duty come in one at a time to introduce themselves. The customer can tell the “madame” which girl he’d like to spend time with, or he can just leave without paying anything.

Amsterdam also has “sex clubs” and these work in a similar way to the brothels, except the customer usually meets the girls in a bar setting, and then goes to a private room after he’s made a choice. These places usually charge an admission fee, and they have a few other notable quirks, so before you go it’s good to read up on Amsterdam sex clubs and be careful about a few things.

Amsterdam continues to promote that there will always be coffeeshops

The “new” plan that has attracted so much attention means they intend to close down about 30 of the 60 coffeeshops currently operating in the Red Light District. But they also say this is part of a 10-year-plan that is just underway, and even if and when this happens there will still be around 30 coffeeshops in the Red Light District alone, and probably well over 100 in other parts of the city, including all the other tourist areas.

At the moment there are so many coffeeshops in the Red Light District that it probably makes some visitors too squeamish to walk through the area. The city spokespeople continue to say that they intend to keep most coffeeshops open, and we believe they mean it. After all, the alternative to having the shops is forcing the cannabis trade back underground and into the criminal element. The city, more than anyone, realizes that closing all the coffeeshops will not lead to cannabis abstinence, but rather to more crime and danger for everyone.

Only about 2 weeks before this announcement, similar headlines announced the city was going to close 43 of the 228 licensed coffeeshops by the end of 2011. That story has to do with a national effort to ban coffeeshops from operating within 250 meters of a school.

First off, the ban wouldn’t be enforced for three more years, and secondly, the Mayor of Amsterdam, Job Cohen, has already said he intends to fight the strict enforcement of that ordinance.

Cohen argues that Amsterdam coffeeshops are already so heavily regulated that having them at the fringe of a school neighborhood doesn’t make any difference. This is an example of the city being pragmatic, and we imagine they’ll prevail on this one. Whenever a younger person enters a coffeeshop they always get asked for a valid ID anyway, so those people under 18 aren’t hanging around in coffeeshops, regardless if their school is 200 meters or 300 meters from the shop.

Over a year after it was proposed, the Netherlands officially banned the sale of fresh hallucinogenic mushrooms at the “smart shops” that had been selling them, along with herbal energy pills and other paraphernalia. The ban was to take affect a few weeks later, on December 1, 2008, and the mayor said wasn’t enough notice so it was unfair to the smart shops.

This situation could change at any time, but for now the city is siding with the “soft drug” businesses, and against the national regulations. This fact alone is enough to give us confidence that they have no plans to actually shut down this important (and mostly safe) aspect of their lucrative tourism business.

On the surface, some of these new plans and regulations make it sound like Amsterdam is marching ever closer to banning coffeeshops and prostitution, but when you look closer at what they are really saying and doing, they seem far more interested in cleaning out the worst elements, and keeping everything else.

If 5 or 10 years from now, the Red Light District has fewer sex toy shops and porn cinemas, as well as fewer coffeeshops, the area might become revitalized and even more fun. Right now most women don’t feel very comfortable in this area after 9pm or so, and this means the existing bars and coffeeshops are packed mostly with men every night. If the city can keep a couple hundred windows open in one concentrated section, and then attract more of a healthy balance of businesses in the rest of the RLD, then we’ll be pretty happy about the changes, and we’ll still have plenty of shops in which to smoke if we choose to.