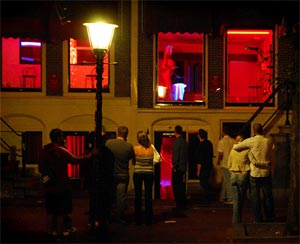 Yes, prostitution is actually legal in the Netherlands, just as it is in many other European countries. But particularly in Amsterdam, prostitution is also a tourist attraction. For the vast majority of people this takes the form of a stroll or two through the city’s largest and most famous Red Light District. There are actually three such districts in Amsterdam, but the one simply referred to as “the Red Light District” is the large and world famous one in the historic part of town just across from Centraal Station.
The famous windows of the Red Light District
In the Red Light District you’ll see scores of working girls flirting with people from behind their red-lit windows. There is no shame in walking through this area, as you’ll be joined by men and women of all ages since this is not only a major tourist attraction, but also a crowded hub for local residents. If you’ve seen random streetwalkers in other large cities you might be surprised to discover that many of the prostitutes working in Amsterdam are actually very attractive, though few are in fact Dutch. This is a legal profession in Amsterdam and many prostitutes belong to a union.
The girls behind the windows
This is obviously the most famous form of prostitution in Amsterdam, but it’s far from the only form. As you walk through the area (especially if you are a man who is alone) the girls will flirt with you and try to get you under their spell. If you are interested you’ll negotiate with them right there in front of their window and before you know it you’ll be in their little room.
>>more information on Amsterdam Red Light District prostitutes and prices
Sex clubs
Amsterdam has quite a few notorious sex clubs, but many people who visit them get ripped off. They often start you with overpriced alcohol and you buying expensive non-alcoholic “champagne” for a girl hoping to get your business. Even worse, on top of an hourly fee starting around €150, you’ll often have to pay a taxi commission for the guy who brought you there of around €75, sometimes even if you didn’t come in a taxi. These places often have bad reputations, although if you’ve got a lot of money and want a little fun they might be a good choice.
>>more information on Amsterdam sex clubs
Private-house brothels
These small brothels are mostly in residential areas and they don’t have bars, but they do offer discreet and usually classy surroundings. On a per-hour basis they are usually cheaper than the window girls, in addition to being much more relaxed and friendly.
>>more information on Amsterdam brothels
Escort services
Since prostitution is legal here it should be no surprise that there are plenty of call-out and internet services where you can have a girl come to your hotel or apartment. Prices and quality vary, but this is usually fairly expensive since the girl has to travel back and forth and there is a bit of risk involved for her as well. Many of the women working for these agencies are very attractive and you might be interested in checking out WhyGo Amsterdam’s list of the 12 hottest escorts in Amsterdam. An example of an Escort service is here: Amsterdam Escort Girls Company.
>>more information on escorts in Amsterdam
Now that you know you are definitely coming:
>>Look for cheap airfare to Amsterdam
>>Look for Amsterdam budget hotels
>>Find a hostel in Amsterdam
For further study
This information is usually enough for most people with a general curiosity about prostitution in Amsterdam, but if you are interested in participating or if you just find it titillating to read about this stuff (no judging here) then you should check out this website called ignatzmice.com. The site is kind of taxing on the eyes and they might have the worst URL in the travel biz, but the site is written by guys with tons of experience with the working girls in Amsterdam. They have detailed info on prices, what you get, how to go about it, and everything else you’ll probably need. They’ve also got a busy forum so they are the authority on the subject and the place to go.