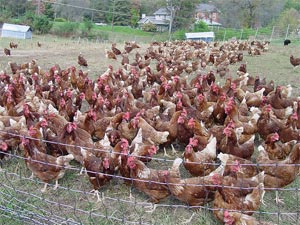 Straight from the Now I’ve Heard Everything File comes today’s news that Amsterdam’s coffeeshops had been using eggs from caged chickens in their marijuana “spacecakes,” and they plan to do something about it. The breaking news says that the shop owners had no idea of the situation and several have already switched to cage-free chicken eggs.

“Coffee shop owners were completely unaware and shocked that their spacecakes are not animal friendly,” said a spokesman for a Dutch animal rights group known as Wakker Dier that is campaigning against using eggs from caged chickens. Four large shops have already made the switch to free-range eggs, and 20 more are set to follow suit.

For the uninitiated, “spacecakes” are sold in many Amsterdam coffeshops, with marijuana or hashish baked in, which gives the consumer an often-intense high that typically lasts 5 to 6 hours. They are referred to generically as cakes, but are frequently in the form of cookies or brownies. They usually cost around €5 for a single serving and have been known to cause problems for first-time users since the high takes about an hour to be noticeable, and gets more intense for the next hour or so, leaving some to over-consume due to lack of patience.

We don’t yet know if the price will creep up to €5.10 to cover the cost of the pricier eggs. Personally, I won’t be satisfied until chickens are accepted as normal members of society and allowed to roam the planet with their chicks in tow, leading happy and fulfilling lives of their own, just as they do on many tropical islands.

At least now I can enjoy my next spacecake with the knowledge that the chicken that produced the egg that comprises about 5% of the cake was able to cruise around inside the pen, bonding with other like-minded chickens and shunning others with whom they disagree.