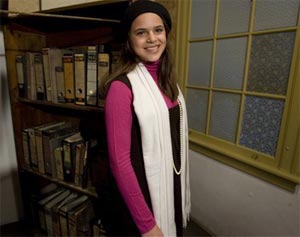 Straight from the ‘Now I’ve heard everything’ file comes news that on Friday, January 4, the cast of an upcoming Spanish musical based on the life of Anne Frank visited Amsterdam’s Anne Frank House in order to do research for the project, and possibly drum up some publicity as well. The musical is called ‘El Diario de Ana Frank – Un canto a la vida’ and runs at the Teatro Haagen-Dazs Calderón in Madrid from February 22 through March 30.

Based on the photos in the story from pr-inside.com, which is nothing more than a press-release mill (but hey, it worked this time, right?) at least the young girl who’ll be starring as Anne Frank is really cute, which could help make this musical a bit less depressing. According to the story, the Anne Frank Museum has endorsed the project, and representatives led the 22-member cast and the directors through the attic apartment to help them get a better understanding of the family and their ill-fated hiding place.

Thirteen-year-old star Isabella Castillo said, “If you’re doing a musical of the family and how they lived and the house and everything, I think it’s very special, and a very important detail to come to this house.” The press release added that she was stuck by how small the apartment was and that it was even smaller than she imagined it.

The Cuban-born actress had been living in the United States before being discovered for this role as Anne Frank, although she says her family briefly hid in Belize, where they had to hide in secret like the Frank family to avoid police there. Her family then moved on to Miami. It’s unclear whether Castillo got the role for her acting and singing or for her supposed parallels to the title character.

Frankly (get it?), I was actually struck by how large the apartment was when I visited the Anne Frank House. Maybe I was confused by the huge museum surrounding the original attic itself. I really don’t know much about Anne Frank aside from what I’ve picked up second-hand over the years. Call me old fashioned, but I don’t think it’s right to read another person’s diary, regardless of the circumstances. My 6th grade teacher isn’t the only person who has misunderstood my fierce stance on privacy over the years, but I stand by it. I doubt I’ll see this Spanish musical either, now that I think about it.