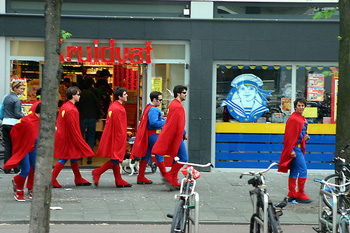 If you are planning a stag or hen party in Amsterdam, then you are not alone. This place is crawling with these things every weekend, and they are so notorious that the majority of hostels and even many hotels specifically ban these groups from staying with them. To be honest, I’d imagine that hen parties are probably welcome in most places (just behave, ladies!), but stag parties in cheap places can be tricky.

To save you the hassle of clicking around on the long list of Amsterdam hostels, I’ve done that for you, and also included a handy map as well as reviews of each approved place and the warnings and caveats that might be involved. You might expect that most party hostels in Amsterdam would welcome these groups with open arms, but several of those actually don’t, based on bad experiences, no doubt.

The good news is that most of these hostels have dorm rooms that hold groups ranging in size from 6 to 12 people, so if your group falls in there then you can probably easily book an entire room and you won’t have to worry about weirdo flatmates and whatnot. Check out the map, and then the reviews below for specific booking instructions and the general vibe.

Map of stag and hen party hostels in Amsterdam

Reviews and important information about these hostels

This is one of Amsterdam’s smoke-friendly hostels, though it’s not really a hostel in the normal sense. It’s in a great location in the main Red Light District, and it consists of private bedrooms that each have 4 bunks. If you have a group of 8 or so, this is one of the best hostels for smokers or potheads. They don’t specifically ban stag and hen groups, though it’s small enough that you might have trouble booking that many all at once.

Both of these places are (understandably) quite similar, so I’ll discuss them together. For one thing, they insist that anyone wanting to book a group of 10 or more must do it by email through groups@flyingpig.nl. But if you have only 9 or fewer then these places are ideal. They are both on the party hostels list since they are smoke-friendly and also have fun bars with cheap drinks.

The Downtown location is close to Centraal Station and the Red Light District, so it’s a better spot for most stag parties, but if that one is booked then the Uptown location is one of the better alternatives in the city. It’s close to Leidseplein and lots of great bars, restaurants, nightclubs and coffee shops.

Our favorite hostel in Amsterdam is a strange combination of hostel and art hotel, and the hotel part has quite a few large rooms that accommodate up to 6 people, so that might be a good way to go depending on your group size. The hostel part allows groups, and you’ll barely be noticed since the entire ground floor is the busy Belushi’s Bar plus a smoke-friendly and huge patio area. This place isn’t the cheapest, but it’s honestly one of the best for sure. The location on the pedestrian-only (and non-seedy) Warmoestraat in the Red Light District is perfect for this sort of thing.

This is a fun and popular place in the Red Light District, though it’s known for being quiet inside. The location is perfect for stag and hen groups in the middle of the action, and they have rooms that have anywhere from 2 to 12 bunks, so it’s easy to lock out an entire room if you book early enough, but they won’t be thrilled by anyone trying to start the party in the dorm areas.

This is another fun place with an excellent location in the Red Light District, just a block from St. Christopher’s. It’s above Slainte’s Irish Pub so that’s a great place where people can be loud and raucous, though the upstairs part of this place tends to be on the quiet side. This is one of the few Amsterdam hostels that comes right out and says they are welcoming of “large groups” but still I’d not mention the stag or hen party part until you are fully checked in.
>>book at White Tulip Hostel

Sort of similar to the Flying Pigs mentioned above, these places are similar to each other so it’s worth explaining them only once. These are among the cheapest Amsterdam hostels, and they welcome large groups, but these are not party hostels by any means so if there is some doubt as to whether your group can keep its cool, then book elsewhere. Seriously, you might get tossed out in the first hour if you start chanting near the lobby of one of these places, so don’t even think about staying here if you guys do that.

The Stadsdoelen location is really convenient, in a fairly quiet section near the Red Light District and Dam Square. The Vondelpark location is very near the Flying Pig Uptown, so it’s way more mellow though in a nicer part of the city for sure.