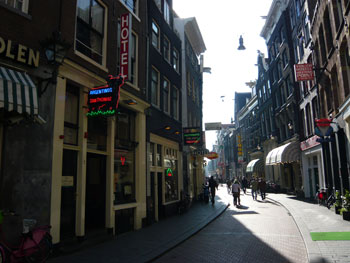 If you are specifically looking to stay in Amsterdam’s Red Light District, you’ve come to the right place. This is a fun and sometimes-wild part of the city, but it’s also beautiful and historic. There are plenty of hotels in the area, and most of them are in the more subdued sections where there aren’t any prostitutes within a few blocks.

The list below is of places that have private hotel rooms starting under €80 per night. There are fancy places and party places, so read the reviews below the big map to see which one seems best for you. If your budget is even lower than this you should click on over to the Red Light District hostels page, as that lists places with dorm beds, many of which also have some cheap private rooms.

Map of cheap hotels in the Red Light District

(reviews and important information about the hotels can be found below)

Reviews and information about these hotels

This is my favorite hotel in the city, and it’s got a hostel section as well. It’s on the same pedestrian street as the White Tulip, but a little farther down from the mad part of the street. This is one of the hotels that are good for smokers in Amsterdam, mostly because they have a large patio behind the bar (the whole ground floor is a bar, really), and you can smoke out there until all hours as long as you are respectful of those around you.

This place is part of a trendy chain all over Europe, but this particular location is a bit unusual in that it’s more of an “art hotel” and all the rooms are uniquely decorated. Rooms start around €60 per night, but dorm beds start around €16 per person if that is more your speed. This is easily one of the coolest and best run hotels in the area and price range, and if you can afford it and it’s available, I highly recommend staying here.

This isn’t a traditional hotel at all. It’s probably the most popular hotel for smokers in Amsterdam, due partly to the fact that it’s part of a complex that also includes a cannabis coffeeshop and a popular bar. The “hotel” part is spread over several buildings in the non-seedy part of the Red Light District, and reviews of past guests tend to be raving.

Rooms with one bed start at €65, but they also have larger rooms with up to 4 beds for higher prices. If you are a smoker (tobacco or weed) this place is nirvana. If not, you are probably better off elsewhere.

This is actually a really nice 3-star hotel at the edge of the Red Light District, but not actually IN the RLD. It’s extremely close to the train station as well, and on a quiet and picturesque little street. Rooms normally start at €100 per night, including breakfast, but they sometimes have specials starting at €77 per night for a double room. If you can get that price and you are looking for a more luxurious place with a great location close to the train station and the Red Light District, this place is ideal.

This is another hybrid hotel and hostel, with very good prices and a fun location. Rooms start at €68 most of the time, for a private double with ensuite. They also have private rooms with 3, 4, 6, 8, and 10 beds, plus dorm rooms, so this place is ideal for groups looking for a cheap place to stay. It’s got a sports bar attached, so it’s also a great choice if you want to stay local and watch some football.

The location is really close to Centraal Station, but it’s also in the somewhat rowdy part of the Red Light District. If you are looking for a quiet night’s rest, you should probably stay in another neighborhood altogether, but if you are looking for a fun and cheap hotel to party with a large crowd, this is a really good choice with a great location.

I’ll be honest, this hotel won’t win any prizes for being fancy or having great guest services, but it’s cheap with a great location, so it could be ideal for certain types of guests. Rooms start around €40 per night for a double, which is cheap even for this area, but you pretty much get what you pay for, facilities-wise. If you are looking for a cheap place to sleep that is close to the party action, this place could be great.

It’s located between several other similar hotels on a fairly quiet street in the Red Light District, which is a few blocks away from the prostitutes and sex shows and such. There are loads of bars and coffeeshops within short stumbling distance, plus many places to eat. As long as you keep the above in mind, this could be a great and cheap place if they have availability.
>>book at Travel Hotel

The White Tulip is a combination hotel and hostel right in the heart of the busy pedestrian district of the Red Light District. Rooms in a 2-person bunk bed start at €55 per night, and they also have rooms with 3, 4, 6, and 10 beds, so this place is really good for larger groups on a tight budget.

There’s a fun and busy Irish pub below the rooms, so you’ll ever have to go too far for a pint. It’s also very close to some of the better coffee shops and plenty of places for cheap food. In this price range it’s a pretty good choice if they have availability.

This place is in the real heart of the Red Light District, and it’s quite cheap with rooms starting at €50 per night for a single with shared bathroom. The name means “tower view” I believe. They boast a bar that is open 24 hours a day and has Sky Sports, so that should tell you quite a bit about who they are catering to and hoping to attract.

The place gets pretty good reviews, and they also have rooms for up to 4 people, so this could be a great place if you are part of a group looking to party. It’s not really a smoke-friendly place like a few of the others, but it’s got that 24-hour bar, so it’s more for football fans than dopehead hippies.

This hotel is quite close to the train station, and on the close edge of the Red Light District, but not near any prostitutes or sex theaters. Rooms start around €65 per night so it’s not the cheapest place in the area, but it does get good reviews and return visitors so it should be considered anyway. It’s a smoke friendly place so if you are a cigarette or weed smoker this is one of the better choices.

It’s located on the pedestrian street in the RLD, and very close to loads of pubs and coffee shops and latenight food places, but it’s also the loud part of the area so if you are a light sleeper you should check for an inside room, or stay somewhere else altogether.