Budget hotels near Rembrandtplein in Amsterdam 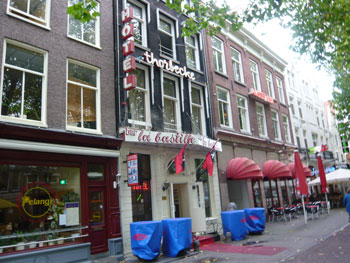 If you are looking for a hotel close to the most glamorous clubs, cafes, and restaurants in Amsterdam, then Rembrandtplein (Rembrandt Square) is the place to be. Most of the hotels in this area are on the more expensive side, but we’ve found a group listed below that usually have rooms for under €100 per night (including tax and breakfast) and would be considered bargains in this popular neighborhood.

One word of warning though, the square itself can be extremely busy and loud, especially on summer weekends, but also on weekends throughout the year and during unpredictable times if an event is happening. So the point is, if you book a place that actually overlooks the square then you’ve got a great view, but it might be loud at night, so bring ear plugs and/or ask for a room facing the back. All these places have rooms that don’t face the square as long as you ask for them.

Also, if this is your first time to the city, it doesn’t hurt to adjust your expectations for the realities here. Hotels in Amsterdam tend to have small rooms, especially by American standards. Cheaper places are usually located on floors above retail spaces, and the staircases are jawdroppingly steep, so if you have a bit of trouble with stairs back home, make sure you book a place with an elevator or on the ground floor.

If you are looking for something in a lower price range you should consider a cheap hotel in the Red Light District, which isn’t nearly as scary or weird as you might think, except for a few places.

(information and reviews of these hotels are below)

I’ve stayed at the Nes several times myself and I can recommend it as long as you keep in mind that it’s just a budget hotel with a great location and not somewhere you’d want to have your honeymoon in. It’s small and family run, and overlooks two canals just across from Rembrandtplein, so it’s actually very quiet even though it’s only a minute or two walk from the center of the action. The location is very convenient for other things as well, so give this one a look if you can afford it.
>>book at the Hotel Nes

This is a budget hotel with an excellent location if you like being right on the lively square so you can keep an eye on things. It’s family run and well regarded, making a really good value for the price. A single room with the toilet down the hall starts at €35 per night, and things go up from there. You get free Wi-Fi in every room, which is rare at his price level.
>>book at the Hotel Atlanta

Warning: This hotel is directly above a nightclub, so if you want to get to sleep early and you aren’t bringing earplugs then book elsewhere. Aside from that fact, it’s a great location right on the square with reasonable prices to match. It gets some bad reviews due to the noise situation more than for the hotel itself, so if you are coming to Amsterdam for the clubs then this could be ideal.

This is one of the nicest hotels in the Rembrandtplein area, at least in this price range. It has one entrance onto the main square and another overlooking a canal so you get the best of both worlds. It can be noisy at night, especially on weekends, but the walls and window panes here are thick so it shouldn’t cause much of a problem, especially if you request a room facing the canal side.

The ITC is actually a few blocks away from Rembrandtplein, but it’s in the direction of all really quiet streets and lovely canals, so the walk to the square and back will actually be a highlight of your stay, and also less than 5 minutes. The rooms are small, but the prices are low so if you don’t have unreasonable expectations then this could be an ideal place that is close, but not too close, to the main clubbing and entertainment action.
>>book at the ITC Hotel

This is another of the nicer budget hotels in this neighborhood, though it’s a couple blocks away and on a fairly busy street. Inside the hotel is quite nice, though the rooms are mostly small, like every other cheap hotel in the city, so don’t expect a suite at this price. They sometimes have promotional rates that put them below €90 per night, which is a great bargain, but other times their rates are higher.