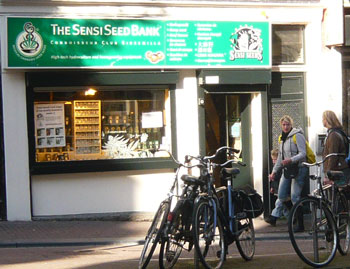 The part of the Netherlands that surrounds Amsterdam is certainly home to the most advanced marijuana growing technology on the planet. It’s a big business, even though it’s still technically illegal, so it’s no surprise that the area is also a hotbed of seeds for sale.

Ironically, the sale of cannabis seeds in the Netherlands is completely legal, so quite a few storefront operations exist, especially in Amsterdam. Many of these same businesses also sell online, as do many other seed banks, as these places are known, so there has been a shift away from physical retail stores and toward online sales. In other words, some seed banks are closing down their stores, so it’s hard to keep track of them.

The advantages of buying seeds at a bank in Amsterdam

Cannabis, both in marijuana and hash form, almost always has a colorful name attached to each individual strain. The best and most scientific minds in the business are constantly coming up with new strains that contain more THC or flower in different colors or taste like something else familiar, so the varieties to choose from can seem infinite. When you are in one of the Amsterdam coffee shops you can test several of them to find the one you like best, both in flavor and the type of high you get.

If you go to a seed bank with a specific name in mind, there’s a good chance they’ll sell those exact seeds so you can theoretically grow the exact same stuff yourself. If you buy online it’s anyone’s guess what you’ll be getting, though the better sites do sell the same seeds so if you know the name already you are set.

Prices of seeds in Amsterdam 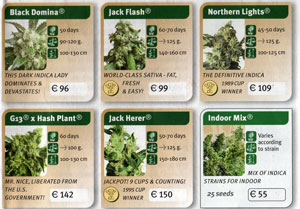 If you’ve yet to begin officially shopping around for cannabis seeds, please make sure you are sitting down because these things cost WAY more than you would probably guess. Seeds are almost always sold in packs of 10, and a 10-pack of the most basic outdoor seeds will start at around €20. If you want the best, like the notorious and Cannabis Cup-winning Jack Herer indoor seeds, a 10-pack will cost around €150. That’s right, €15 per seed!

They give you a careful breakdown of the best season, length to maturity, and typical yield of each seed, so you’ll know exactly what you are getting and how best to grow it. There are all price points available in between those extremes, and you can get really high quality seeds for €50 or €60 for 10 of them.

If you’ve yet to visit Amsterdam and were just thinking that you would just buy some weed instead and take the seeds from there, think again. Pretty much 100% of the weed in Amsterdam is sinsemilla (AKA seedless), and even if you found some that had some seeds it would probably be the last variety you’d want to go through all that trouble to grow yourself.

Bringing seeds back home with you 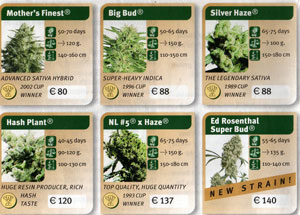 Realistically speaking, the chances of an airport official finding your tiny bag of 10 seeds is almost zero, assuming you don’t panic and confess when they say hello. If you are going back into the United States directly from the Netherlands there’s a decent chance that a drug-sniffing dog will check out some or all of the luggage from your flight, but we’ve never heard of anyone getting caught this way because the seeds don’t smell like anything while the weed itself can often be smelled by everyone in the terminal.

Still, this isn’t something to be taken lightly, and you may even notice that the Customs people will emphasize the word SEEDS when they ask you if you’ve brought back any meat or weapons or radioactive materials or seeds and so forth.

Deciding in Amsterdam and buying online

As mentioned above, it can be great to actually choose what you want while in Amsterdam, after you lock in the particular strain you are after, and then you can usually order it online. Many of these seed banks only ship to countries where it’s actually legal, but many more ship “anywhere in the world” so they let you worry about the consequences.

Anecdotal evidence on this topic suggests that no one has ever been busted by receiving seeds in the mail. Even in the conservative US, people report that the worst that happens is you get a note in the mail saying an illegal shipment was intercepted and that the case is closed. Sometimes they may send the actual package along with the seeds gone and that note enclosed.

I’ve never done it, so I have no experience myself, but I’d imagine that the more reputable seed banks must have a pretty good system of getting these things to their customers, or they’d be out of business in a hurry, or at least they’d refuse to even try a shipment.

As mentioned above, these places are struggling to stay in business, so a few of the more prominent ones have closed down. Smart shops (where they used to sell magic mushrooms) would usually sell seeds, but those places are under fire now. Even some gift shops in the Amsterdam Red Light District sell them, but you may think twice about buying from such a place, considering how much these things cost.

One excellent and recommended seed bank

The Sensi Seed Bank of Amsterdam is one of the oldest and most famous banks in the city. They have two locations and have been in business for over 20 years. Furthermore, they are owned by the same people who run the Cannabis Museum and the Cannabis College nearby.

If you are into this as a hobby you should absolutely go into the Cannabis Museum and speak to the people in there to get great tips on all this stuff, and then go next door to the Sensi Seed Bank shop to do your purchasing.

Map of the Sensi Seed Bank