Cheapest hostels in Amsterdam – A guide to low-priced beds 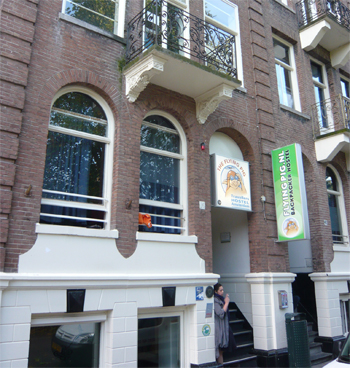 Amsterdam is a huge destination for backpackers and student travelers, so the city is loaded with hostels. Those on the tightest of budgets have plenty of options, but of course not every hostel is all that cheap. Here we’ve listed all the hostels that advertise cheap beds at least during certain times of the year (typically the winter) but they are also usually the cheapest even during the peak season in summer.

One thing to take into consideration is that most of these cheap places tend to book up well in advance, so it’s really best to book as early as possible if you want to lock in a room. Most of the best and most famous hostels in the city are on this list as well, so these aren’t the ones that have trouble filling up. It’s actually the case that these places prefer to keep prices low so they are always full, rather than some other places that only get booked up on busy weekends.

Reviews and important information about these hostels

This is the most famous hostel in the city, and it deserves its reputation as one of the best Amsterdam party hostels. Beds in the larger rooms are quite cheap as well, so this is an ideal hostel for someone on a limited budget. To make things even better, there are cheap drink specials at their fun bar around the clock. There’s also a coffeeshop about 20 meters out the front door, so they have got you covered.

The location is extremely close to the train station, and also close to the Red Light District, but it’s not in the RLD, and it’s on a nice shopping street that is quiet at night.
>>book the Flying Pig Downtown Hostel

This is a cheap hostel/hotel combo, with a great location if you like staying on the busiest street in the city. It’s not as nice or cool as most of the others on the list, but the location really is great and easy to find, and it’s perfect for those who don’t want to hang out in their room much, and want to save money in the process.
>>book the Damrak Inn

Our favorite hostel in Amsterdam has an excellent location in the non-seedy part of the Red Light District, on a busy pedestrian-only street that is also lined with hotels, hostels, pubs, coffeeshops, and restaurants. Prices here are often higher than their listed lowest price, but they do have good bargains during certain times of the year.

This place is really more of an “art hotel” and the whole bottom floor is a busy and fun bar, with a great patio where smoking various things is permitted. The patio party goes on until the wee hours, so if you are a light sleeper make sure to ask for a room not overlooking the patio.
>>book the St. Christopher’s at the Winston

This hostel is one of the nicer ones in the city, so their low prices are even more welcome. The one knock on the place, for some people, is that rather than being in the heart of the city, it’s really in the heart of the seedy part of the Red Light District. Well, it’s not really too seedy, and it’s very fun for most people, but single girls could be uncomfortable in this area, especially later in the evening. But it’s a great hostel for groups of guys, especially those interested in checking out the live sex shows and whatnot.
>>book the Heart of Amsterdam Hostel

This is a large and affordable hostel sort of at the edge of the Red Light District. It’s in a quiet part of the city center, but it’s very close to pretty much everything, so it’s a great combonation for many people. The one thing to be aware of is this is NOT a party hostel, and they tend to get lots of groups of young people, so if you plan on getting wasted and staying that way all day, you should stay somewhere else.
>>book the Stayokay Stadsdoelen

This place is yet another hotel/hostel combination that has cheap dorm beds and cheap private rooms as well. Its location is great for those who like the restaurant and nightlife area around Leidseplein, since it’s literally mixed in with all that action. There are plenty of good coffeeshops and bars around here too, so you won’t run out of things to do in the evenings. It’s not really a party hostel, but it’s clean and safe and well run, so if you can get a cheap bed or room here you are doing pretty well.
>>book the Orfeo Hotel

The Marnix is both a hotel and a cheap hostel, and it has an excellent location for anyone wanting to stay closer to Vondelpark, or the Leidseplein entertainment area, or the museums. But the low prices are partly due to the basic way the place is furnished and run. This is not luxurious and the service isn’t fantastic, but it’s usually fairly clean and safe, so if you are looking for a cheap place to sleep and you don’t plan on spending a ton of time in your room, this place could be great.
>>book the Marnix Hotel and Hostel

The Princess is very similar to the Marnix, described just above. The location is great for people wanting to be near the attractions in this part of the city, and the price is cheap, but don’t expect much luxury or 5-star service. Location is important in this city and this place is cheaper than plenty of slightly nicer hostels that are far out, so this is really a decent choice.
>>book the Princess Hotel

For those who want to stay in the Vondelpark and museum area, you’ve got two great choices for cheap hostels, and they more or less face each other overlooking the panhandle part of the park. This place is a busy and popular hostel that is quiet and very safe, so it gets groups of younger people from time to time. So if you want a mellow place, book here, but if you want a party hostel, book at the Flying Pig Uptown mentioned just below.
>>book the Stayokay Vondelpark

This is often the cheapest hostel in Amsterdam, and it’s also a fun and popular place that has a reputation for being a party hostel, just like the other Flying Pigs. It’s just at the edge of the skinny part of Vondelpark, and it’s close to Leidseplein and the museums, so this has a lot going for it. There’s also a cheap bar with great drink specials, and a smoking lounge, so it attracts stoners and drunks, but not so bad that it’s like sleeping in a Cheech & Chong movie.
>>book the Flying Pig Uptown