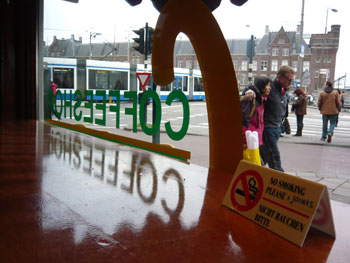 This may sound like an odd subject for an article, but I’ve noticed that quite a few people are curious about this exact topic, so I thought I’d answer the question. In particular, Amsterdam’s Schiphol Airport is a very popular place for layovers of between 4 and 12 hours, and one of the things this city is most famous for is its cannabis coffee shops. If, for some reason you are actually interested in buying real coffee, then you’ll have many opportunities in the airport itself.

And in case you were wondering, there are no cannabis coffee shops at the airport, nor are there any nearby, at least that you could reach without your own car. The good news is that you can be at the main Amsterdam train station in around 20 minutes if you follow the instructions in the layover guide.

This interesting phenomenon is one of the many reasons I’ve written a full guide to dealing seeing Amsterdam while on a short layover. Some people want to see a bit of the city, or go on a canal tour, or check out a museum, or wander the streets of Amsterdam’s Red Light District, but another group of people want to check out the coffeeshops, so here is the quickest way.

First off, have a look at the Amsterdam layover guide, as that gives you most of the instructions for doing this, including letting you know if you have enough time to pull it off. Once you skip to the bottom of that, where it deals with visiting a coffee shop, come back here and we’ll proceed.

As if built specifically for this purpose (and that might actually be the case), there is one coffeeshop that sits on a corner directly opposite one of the exits of the main train station. When you first walk out into the sunlight it’s still about 150 meters away, and you’ve got to cross a series of confusing tram tracks and bus lanes, so be careful. See the map below and it’ll all make sense.

The trick is after you get off the train, walk toward the exits looking at the city, and then keep heading left before you go outside. When you get to the main exit down the long hallway, you’ll be as close as possible to this coffeeshop. If you go out the main center exit and go straight, you’ll miss it entirely.

The good news is there are quite a few other coffeeshops no matter which direction you go in, but if you want to maximize your time and enjoy the novelty of the closest one, keep left. 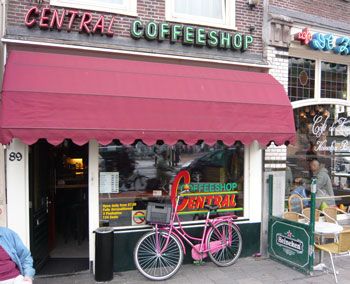 Considering the fact that this place gets a lot of layover smokers who are in a hurry, it’s a nice place with good quality weed. It’s not one of the more comfortable shops in the city, but you are in a hurry, right? They’ve also got 124 seats and 3 pool tables on multiple levels, but you might not have time to enjoy those things.

Another interesting and helpful feature about this place is the fact that it opens at 7am each morning. Most shops open closer to 10am so this is unusual and it’s no doubt partly due to the layover phenomenon and the fact that it’s the closest place to the train station as well. Many of these layover flights land in Amsterdam around 6am or 7am, so this place is open to meet your early morning weed-smoking needs. 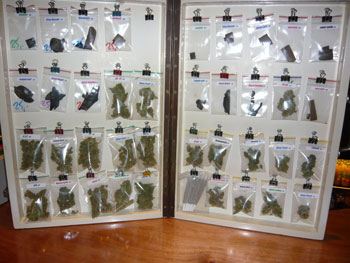 Unlike most coffeeshops, Central doesn’t have a traditional menu, but rather a display case with actual samples of each in small baggies. Prices are €12.50 for most baggies and €25 for some others. The stronger the weed or hash the less you get for that price. Most other shops sell everything by the gram, with a single gram going for between €7 and €12.

If you only have 20 or 30 minutes then there’s no way you’ll be able to smoke even close to a gram, so you might want to find another place and buy a smaller quantity. The Central also sells bags of pre-rolled joints (see the bottom row of the photo, it’s the left-most thing on the right side of the box), but only the European-style ones with tobacco included.

Ask the guy behind the counter to see the menu, and he’ll put the case on the countertop. Find the one you want and a few seconds later you’ll have your own baggie of it, ready to smoke. As you probably know, it’s easy to lose track of time in these situations, so try not to miss your flight.