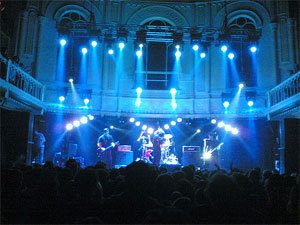 When you are traveling it can be really fun to go to a concert from one of your favorite bands that happens to be in town on one of the same nights you are. Amsterdam has surprisingly few venues for major touring bands to play, but the good news is that the major ones are quite good and relatively easy to reach when you are staying in the city center.

There is live music in Amsterdam happening every night, but the local live music scene here isn’t nearly as good as you might expect. Let’s face it, even though this city is known for hosting top Dutch DJs like Armin van Buurin, Tiesto, Ferry Corsten, and Junkie XL, none of them are actually from Amsterdam, and the list of famous international bands from this city is equally short. Golden Earring is probably the most famous Dutch band of all time, but they are from The Hague. There just isn’t a lot of good local music here (although I’m sure most every local band would disagree).

Fortunately every major international touring act comes through Amsterdam at some point, so if you can look ahead far enough you might even be able to get tickets for a good show before you even arrive in the city.

Find out who’s playing and where 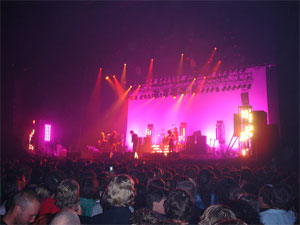 There are several ways of doing this, but the most efficient is to search on Pollstar, which is the concert industry trade publication and website.

They list every scheduled concert for the next 12 months on that page, although they aren’t 100% accurate because occasionally a promoter will do a show that does not get input in their system. But generally speaking, nearly every show at every major event is listed on that page.

If you are coming in the next few weeks and you want to see nightly listings of who’s playing where, including parties, DJs, and other events, you have at least two options.

Underwater Amsterdam is an excellent site that keeps accurate listings for everything going on in the city. Just click on the What’s On link and then scroll across to find the dates you’ll be here. It isn’t obvious when looking at the site, but you can click on each event for more details.

Amsterdam Weekly is the local English-language weekly newpaper. It’s free if you can find it in the city, but it’s also free in PDF form online each week, and they have reliable listings if you want something to read online or print out. 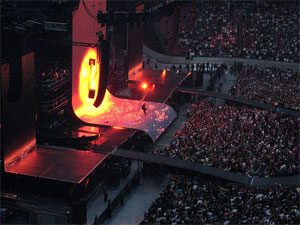 This stadium is where Ajax football club plays, as does the Netherlands national team for some of their home games. There are over 50,000 seats, so only the biggest acts play here. It’s a bit south of the city center, but it’s pretty easy to reach.

>>more information on Amsterdam ArenA and how to get there

This new 5,000-seat concert hall is right next to the Amsterdam ArenA, so see the above link for instructions on getting here. Artists too big for the city center clubs and too small for the ArenA itself play here, and the lineup is usually quite impressive. There’s also a 700-capacity venue attached that sometimes holds its own parties and events.

This multi-use complex is just off the Leidseplein square in the city center so it’s walking distance for most tourists. It has many different venues inside, including 2 different halls that each hold around 1,000 people. Sometimes there are different artists playing in each, with a separate admission for each.

>>more information on the Melkweg

This place is on the other side of the Leidseplein square from Melkweg, and is similar in size. This used to be a church and the main room reminds you of that fact. This place also has an impressive schedule most of the time, especially during the warmer months.

>>more information on the Paradiso

Wondering if you can smoke weed in a concert?