The most common visit to Amsterdam is only 2 or 3 days, often over a weekend break or just passing through on a larger tour of Europe. Fortunately you can actually see most of the important sights in a short time, and those wanting to suggestions for an itinerary for one of these quick trips might be interested in the weekend in Amsterdam section.
But if you have scheduled more than 3 days or so for Amsterdam you might be able to see the main sights and then also squeeze in something else outside the city center as well. If you are staying 5 or more days you can probably take in at least two of these day trip ideas. Amsterdam is fascinating, but so are many things in the area surrounding the city center, and a few of them can be done in as little as half a day.

The largest building in the world (by floorspace) is just outside the Amsterdam city center, and it’s where they auction off about one-third of the world’s flowers most mornings.
The best sights and the auction itself are seen between 7:30am and 11am, and it’s only a 30-minute bus ride to get there. This is highly recommended, even if you aren’t much of a flower person.
>>more information on the Aalsmeer Flower Auction 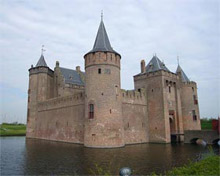 There are castles all over Europe, but it’s not commonly known that one of the better-preserved ones is just outside the Amsterdam city center, and easy to visit by a short bus ride.
If you’ve toured a dozen castles in other countries then this one might not be worth it, but if you aren’t sick of them yet then this is a fine example and worth half a day.
From April through October it’s open daily, but only on the weekends from November through March.
>>more information on Muilderslot Castle of Amsterdam

Beaches, and even nude beaches! 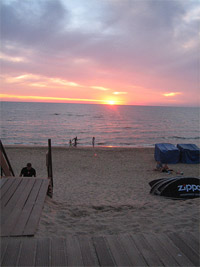 The Netherlands has its share of beach resorts, and while they don’t compare to those on the Mediterranean, when the sun is shining they can be pretty fabulous anyway. Zandvoort is the largest and most popular, and it’s only 30 minutes away by train.
This is Europe, so topless sunbathing is fairly normal for women, although it’s not allowed everywhere. But there are also nude beaches near Amsterdam, mostly in designated areas near the major beach areas.
>>more information on nude beaches near Amsterdam

Even though Amsterdam is by far the most famous city in the Netherlands, it’s certainly not the only one worth visiting, especially if you’ve got a day or two extra. Fortunately, there are many good options that are each within an hour of Amsterdam by train, and an ambitious traveler might even try stopping in more than one in a day.
Rotterdam
The second largest city in the Netherlands is home to one of the world’s largest ports and a very pleasant center area that is almost all new, so it contrasts nicely with Amsterdam. There are some interesting things going on in the harbor, as well as some pretty good museums.
Den Haag/The Hague
Most of the government offices are in this somewhat sterile city on the coast, but it has a modern center and also some of the best museums outside the few famous ones in Amsterdam.
Delft
The famous blue and white pottery called Delftware is still made here in a few factories that love to show off the technique to visitors, especially those who might be interested in buying a piece or two. It’s in between Den Hague and Rotterdam, and a quick stop for those going from one to the other.
Utrecht
This is where you’ll find the largest university in the country, as well as a historic city center that beats Amsterdam in some ways. The Dom Tower of Utrecht is the city’s most famous sight, and probably worth a quick trip there by itself.

Getting from Amsterdam to other major European cities