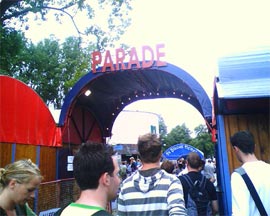 One of summer’s most highly anticipated events among locals has a name that is more than a little misleading for outsiders. Yes, “De Parade” translates into “the parade,” but this is much more of a carnival with a theater theme than anything resembling the kinds of marching parades that Americans are used to on national holidays. De Parade actually visits the cities of Rotterdam, The Hague, and Utrecht for about 6 total weeks starting in mid June before culminating with 17 consecutive days of celebration as one of the highlights of August in Amsterdam.

So what is De Parade?

It’s basically a theater festival, with an unusual mix of traditional performances that you might expect to find at a Renaissance Fair combined with modern twists that give it a unique and artsy flavor. They do their best to schedule something for everyone, with performances starting in the mid afternoon and then going on past midnight. There are multiple stages set up throughout Martin Luther Kingpark, and usually several different things going on at any given moment. There are a few carnival rides mixed in, but it’s mainly about shows and performers.

You’ll also be treated to many ‘teaser’ performances from wandering entertainers that are meant to attract a larger audience to a main show a bit later on. The scheduled shows last anywhere from 3 minutes to 40 minutes. Many of the shows are free and all around you, but many of the larger main-stage performances each come with a different price tag that ranges from €3 to about €7.50.

Children are welcome and there is an extensive children’s program that begins at 3pm each day, but after that finishes up things get a bit more ‘adult’ as the evening progresses. You can expect a mix of theater, magic, comedy, dance, varying styles of music, and even film and multimedia shows. Many in the Dutch arts communities look forward to De Parade with great anticipation as this gives them an outlet for special shows and performances that are hard to reach an audience most of the rest of the year. Many of the shows and goings on are in English and some are mime or language free, so tourists won’t feel left out much, although some things are in Dutch so you might have to pick and choose.

One of the most popular aspects of De Parade is the international food booth area that sells both full meals and tempting small snacks. With over a dozen different cuisines available, no one is likely to have any problem finding something that appeals to them. Among the choices you’ll find Surinamese (always popular in the Netherlands), Mexican, Italian, Portuguese, Algerian, Japanese, Cajun, soul food, French, and gourmet pizza. The small servings most of them sell make it very easy to take a world culinary tour without leaving the food area of De Parade.

3pm until midnight Sun-Thurs
3pm until 1am Friday-Saturday

The festival area itself is free from 3pm until 5pm daily, and then €6 after that.

Location and how to get there

De Parade takes over Martin Luther Kingpark, which is about 4 kilometers south of the city center. Getting there is easy on the tram, as the #25 goes all the way from Centraal Station, along Damrak, and then south directly to the park where it loops around and goes back toward Centraal Station. The park is located in the center ring, so you’ll only need to cancel 2 strips on your strip ticket each way. See the main Amsterdam public transportation page for details on how to pull this off.

Map of Martin Luther Kingpark and the city center