If you haven’t been to Amsterdam yet you’ll be pleasantly surprised that the city center – which is basically the part that contains everything tourists are interested in – is quite compact. The city has all the usual options plus a few more, but there are a few reasons why this city is perfect for some methods and poorly suited for others.
>> If you’re looking specifically for information about how to get from the airport into the city itself, then please visit our guide for how to get from Amsterdam Schiphol Airport to Centraal Station and Downtown. 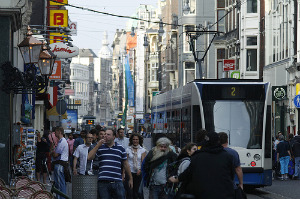 Unless you have a physical disability or are really lazy, this is almost always going to be the best method to get around. Except for tiny inclines at most bridges, the city is perfectly flat. And as mentioned, the part of the city you’ll be interested in is quite compact. From Centraal Station to the Museum District is just about the furthest distance anyone would need to go in one shot, and that’s about a 30-minute walk. It’s also gorgeous along the way so the walk itself should be an enjoyable part of your trip, much more so than sitting in a taxi.
If you are moving about with your luggage or with small children there are certainly times when walking isn’t the best option, but once you arrive you’ll see that your feet are the best option in most cases. Get a good map when you arrive (free at most hotels and from the VVV tourist bureau in front of Centraal Station) and then organize your sightseeing into groups of things close together.
>> Get a good Amsterdam map to navigate your way around the city

Amsterdam has an excellent network of trams, buses, and even an underground/metro, but they are a little intimidating at first to say the least. The trams are the most useful of the bunch for visitors, but the system is somewhat confusing for newcomers. The public transportation network is fairly cheap, and it’s all run by the same authority so the payment method is the same on all of them.
>> For more detail, see our guide to public transportation in Amsterdam 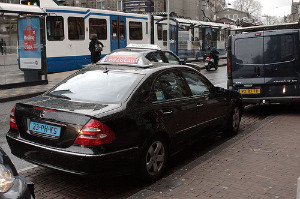 There are occasions when a taxi is a good option and taxis are usually plentiful in Amsterdam. You can hail them on the street, but huge chunks of the city center are no-stopping zones so it’s almost always easiest to find taxis at the designated taxi stands around the city. You’ll find a line of available taxis at these stands, which are easy to spot at Centraal Station, Dam Square, Rembrandtplein, Leidseplein, and Museumplein, among other places.
The first three people ride for the same price and there is a surcharge for 4 or more passengers. A trip from Centraal Station to the Museumplein area will cost around €12-14 on the meter, and tipping isn’t required, but most drivers do expect a bit of change on top of the fare. You can also call taxis on the phone if you are off the beaten track. Your hotel will usually be happy to call one for you.
>> The city of Amsterdam has a great page explaining more details of using taxis. 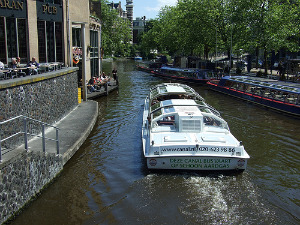 Getting a tour and orientation on the canal boats is an excellent way to see the city, and some of the companies offer this as a means of getting around as well. A basic 60-minute canal tour usually costs around €9 and for about double that you can hop-on and hop-off at designated stops for 24 hours. The stops are mostly in really handy places around town, but these are a slow and expensive way of getting from place to place.
Most people who plan on using them as local transportation give up soon after the first lap is complete since walking is usually far faster unless you are specifically going to places directly on their route and one happens to be pulling up when you are ready.
>> For more details on the canal cruises, including why they’re a great option when you first arrive in the city, see our guide to Amsterdam canal tours. 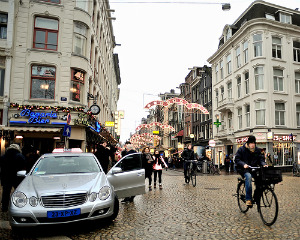 This is very similar to the Canal Bus in that it looks like it would be a great and novel way of getting around Amsterdam, but the reality is quite different. Yes, you can rent bikes easily in Amsterdam, and they aren’t terribly expensive (usually €10 a day or less), but riding a bike between museums or coffeeshops isn’t nearly as easy as it looks.
You’ll notice that there are hundreds of thousands of bikes on the streets of Amsterdam and they are excellent and fun transportation in one sense, but there are major downsides:

Usually visitors to Amsterdam have other destinations on their European itineraries as well, so here are some articles to help you figure out the best transportation methods to get from place to place.