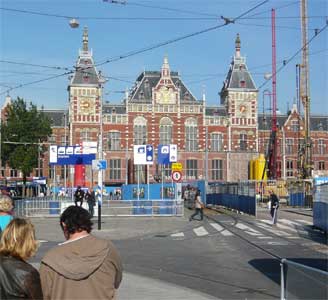 This city might have more hostels per capita than any other on earth. Not only is this a huge tourist destination for all types of travelers, but there are a few things that make it especially popular with the backpackers and budget travel crowd. Although there are actually hostels and budget hotels sprinkled all over the city, the majority of the cheapest ones are within a short walk of Amsterdam’s famous Centraal train station. There are also quite a few hostels in the Red Light District, but not all of them are particularly close to the train station, so the lists are a bit different. If your main objective is to find the cheapest hostels in Amsterdam, then you have some options in this area, but those are found in different neighborhoods around town as well.

If this is your first trip to Amsterdam, here are some things you should know before booking a hostel:

Map of the best hostels near the train station

Descriptions and extra information about these hostels:

This is our favorite hostel/hotel in the city, and we are not alone. It gets booked up long before most other places, so reserve a bed or room as soon as you are sure of your dates. It’s one of the best Amsterdam party hostels, but it’s actually more of an “art hotel” with a big bar that dominates the entire ground floor. You can smoke cannabis in the patio area as long as you aren’t bothering anyone. Some of the rooms are huge with many beds, so if you are coming with a group you might be better off booking a 4 or 5-person hotel room instead of beds in the hostel section.

This hostel is in the Red Light District on a busy pedestrian-only street that is lined with bars and coffeeshops, but there are no prostitutes within site from the front, so it’s a good place to be near “the action” without feeling like you are on top of it.

The White Tulip is located on the same pedestrian-only street as St. Christopher’s, so it’s a great and fun location without being seedy. This is also one of the better hostels in the area so you should think about booking early if you want to stay here. There’s an Irish pub downstairs and a generally fun atmosphere, though it’s not quite a “party hostel” like some of the others.
>>book at the White Tulip Hostel

This is a popular and busy hostel in the heart of the Red Light District, though not really in the heart of the whole city. It has movie-themed rooms and a generally fun atmosphere, and it also has a good reputation for being clean and having a friendly and helpful staff. This is definitely one of the better hostels in this area, even though it’s basically in the seedy part of the Red Light District.

This is a budget hotel rather than a hostel, so you can’t book a dorm bed here, but it’s cheap enough to consider for groups of two or more. It’s at the end of the Red Light District, so it’s a bit outside the seedy part, but it’s very close to it as well. They allow smoking in the rooms, which is unusual now that the smoking ban has taken affect. You could do a lot worse than this place, so it’s a good idea to book here as early as possible to avoid getting shut out, because it does regularly fill up.

The Globe Center is one of the closest hostels to Centraal Station, and it’s in the wildest part of the Red Light District. They’ve got a busy 24-hour bar so this place is ideal if you like to drink round the clock. But it’s not known as the cleanest or best hostel around, so don’t book here if you want a 3-star or above hostel with all the amenities.
>>book at Hostel the Globe Center

Bob’s is one of the first hostels in this city, so it’s a bit of an institution. It’s on a big street in a quiet neighborhood less than 10 minutes walk from the train station. It’s easy to get to the really fun parts of town from here, though this isn’t really in one itself. This place isn’t known as the cleanest hostel in the city, but it does have a pretty good reputation and a lot of loyal repeat customers.

This is a cheap and basic hostel/hotel that is located on Damrak, which is the busiest street in the entire city center, so it’s a bit like staying in Times Square or Piccadilly Circus from a density standpoint. It’s not all that nice and don’t expect great service, but it does have kind of a party atmosphere and the location is great if your goal is to stay 200 meters from the train station on the biggest street.
>>book at the Dam Hotel

The Damrak Inn is another hostel/budget hotel combo that is just down the street from the Dam Hotel mentioned above, and it’s similar in most other ways as well. It’s a bit farther from the train station, but closer to Dam Square and Rembrandtplein, although they are only about two minutes apart on foot so it really doesn’t matter. This is a great place to stay if you like this bustling location and don’t want to worry about finding a hostel on some small street, but it’s really not recommended if you plan on spending much time in your room.