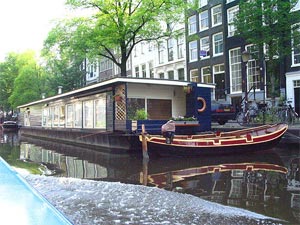 This is a special category for Amsterdam and one that should be given some careful consideration by almost everyone, or at least everyone not looking for the cheapest bed possible. There are a few companies in town that offer private houseboats in the city on a daily basis, and a few others that rent houseboats on a weekly or monthly basis. When you get to town you’ll see that houseboats are more or less permanently anchored along virtually every canal. They are there for decades in the same spot and have an address just like the buildings they face across the street. So these are basically stationary floating apartments rather than anything resembling a seafaring vacation rental.
The great things about houseboats in Amsterdam
They tend to be much larger than hotel rooms, and on most of them you have no direct neighbors so you share no walls. They are usually well located and it’s very convenient to be literally three steps from the street instead of forty steps from the top of the first staircase you have to navigate to eventually be outside. Particularly if you are coming with a group of three to six, you can find a multi-bed or multi-room houseboat that can be shared by all that is much more enjoyable than a few tiny rooms in a hotel. The houseboats also usually have a full kitchen, so you can buy groceries and cook for yourself to save some money if you are the type who enjoys that while on holiday.
The not-so-great things about houseboats in Amsterdam
They are not cheap, and in fact can be very expensive. Depending on the exact location they might be swaying along with frequent canal boat traffic for up to 16 hours per day. Most canals are quiet and have almost no moving traffic, but some of the larger ones are on the canal cruise route, so large boats go by every few minutes. If this sort of motion might be a problem for you, check the specifics on your boat before you book.
Not cheap, but often worth it anyway
For a single person or a couple, a houseboat in Amsterdam might not be worth the expense, but for any larger group this can be a really fun and unique lodging splurge. Seriously, the hotel rooms in Amsterdam tend to be quite small, even at the more expensive hotels. So if you have 2 or 3 couples traveling together, or even perhaps 4 single people, renting a houseboat can be unforgettable and a great value considering what you get. Most of them have large living rooms so it’s similar to having a huge hotel suite. They also have TVs and stereos, and since you usually have no neighbors, you can have a fairly loud party right there on your boat.
Be very careful before you book a houseboat
Houseboats can be great for all the above reasons, however they are literally spread all over the city. The places that rent by the day or week tend to have them in very central locations, but you really need to check. The center of Amsterdam is fairly compact, yet the city does go on and on out into the suburbs. Renting a houseboat far from everything is probably not worth doing.
If you are looking at a site that offers houseboats, the cheapest ones will almost always be in distant parts of Amsterdam. Seriously, you can’t be too careful about this part. Staying on a houseboat in the city center, or close to the city center, can be an amazing and unforgettable experience, but if your houseboat turns out to be 2 kilometers or more from the city center, you’ll feel like a sucker staying there because the novelty and fun will be more than canceled out by being a long way from everything you came to see in the first place.

There are several sites that specialize in renting out houseboats for people, but you can also sometimes find them being rented out by private parties. As with so many other things of this nature, Craigslist is usually the best place to start looking.
This site lists many houseboats, some at very reasonable prices, as well as Amsterdam apartments on short term leases. As mentioned above, be careful of distant locations on any cheap houseboat being offered.
>>Houseboat + Apartment Hotel
This site has a few places, and occasionally has last-minute specials that are quite reasonable.
>>Amsterdam houseboats
This place runs a well-located 3-star hotel with rooms starting at €85, and they also rent out a few apartments and a few houseboats. The houseboats start from €165 to €325, which is pretty reasonable considering the size and good locations of these places. The most expensive one is huge, with 2 bedrooms, 2 kitchens, 2 bathrooms, sleeper sofabeds in the living room, and a nice terrace.
>>Amsterdam House hotel and houseboats
This method is hit or miss, but you might get lucky. There are a number of houseboats that are rented out by private parties and they occasionally advertise on this Craigslist page, and other times you’ll see only apartment listings and aggravating spam postings.
>>Craigslist Amsterdam sublets