How will Amsterdam’s new no-smoking laws affect the coffee shops? 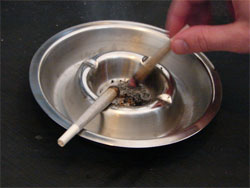 You may have heard that as of July 1, 2008, Amsterdam is following in the footsteps of cities all over the world in banning cigarette smoking in public places. Some alarmists have spread false rumors that this law will shut down Amsterdam’s coffeeshops, but this isn’t true (we’ll get you for this, alarmists!!!). As of late April 2008, the exact way this law will be interpreted for the coffeeshops is still a bit unclear, but there is zero chance this will close them down.

I’ve just spoken to a few people at different coffeeshops, and I got information on where things stand now. I’ve updated the 2008 no-smoking laws in Amsterdam page on the Amsterdam coffee shops FAQ. Check there for the latest word, and I’ll keep checking and adding new information as I get it.

The short version is that all the shops should continue to operate. Mixing tobacco with cannabis to smoke in the shops seems likely to be banned and enforced, but this isn’t 100% confirmed yet. Since nearly all Europeans roll joints mixing tobacco with weed or hash, this might force them to switch to the style preferred in the rest of the world. If you aren’t aware of the big differences between the way Europeans and everyone else roll joints you can learn about it on the joints in Amsterdam page on the FAQ.