What is this new Ice-o-lator hash, and is it really as strong as they say? 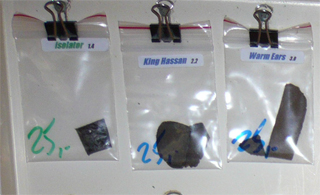 If you are really looking for the strongest cannabis high you can get (without overdosing on space cakes), then you’ve just found it. Ice-o-lator is a new and special kind of hash, which was just introduced in Amsterdam coffeeshops starting around late 2005, and its deserved reputation for being the strongest buzz available has helped it spread quickly.

The Ice-o-lator hash (occasionally spelled Isolator hash) is extracted from cannabis plants in a totally different way than normal hash, using ice to get an extremely concentrated batch of resin. Our friends at the Hemp Hotel have put together an excellent description of how Ice-o-lator is made, although I’m told that it’s actually quite tricky to do it well, even if you know the principle behind it.

Most normal hash will top out at around 25% THC (the active ingredient), and I’m told that Ice-o-lator can be 40% or even higher. Does this get you more wasted? Yes, it does.

I must warn you that this stuff can be insanely strong, so unless you are already a regular smoker who is looking for a new thrill, this hash should be avoided. I’m slightly embarrassed to admit that the first time I tried the stuff, I spent about the next 30 minutes telling the guy sitting next to me how high I was. I couldn’t help it and the next day I felt a bit sorry for this stranger because who wants to hear that sort of thing from someone they’ve never met? It’s not a vulnerable feeling like when you eat too much spacecake, but it can still get a bit uncomfortable if you aren’t a pro.

Is all Ice-o-lator hash the same?

You might not have even thought to ask this question, but I put it on here because this is a big part of this subject. No, every batch of this hash is different. Unlike normal cultivation of weed, or normal production of hash, this is more art than science at this point. The people who make it do so in fairly small batches, so this is a bit like making your own beer at home. Depending on a variety of mysterious factors, one batch can be way stronger than another batch. You’ll see below that this fact makes buying this stuff a bit tricky.

How much does Ice-o-lator cost and where can I get it? 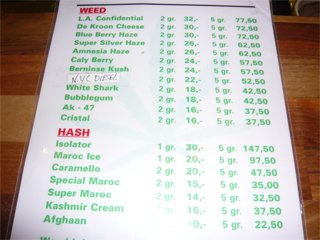 Much more so than any other type of weed or hash, the price of Ice-o-lator hash can vary from “expensive” to totally outrageous. The strongest types of weed and normal hash in each coffeeshop will sell for around €13 to €15 per gram, however, Ice-o-lator can range between €15 and €60 per gram. Another complication of this is that (see the topic directly above) this makes it very difficult to tell if you are paying a fair price or totally getting ripped off.

I’ve spoken to many guys at the coffeeshops that sell this stuff, and everyone has a slightly different story. Some say that anything over €30 is a waste and a complete joke, while others say that the very best stuff deservedly costs €50 or even more. As a bit of a cheapskate, I’ve only tried kinds costing between €20 and €30, and I was extremely satisfied with both. I’d say that at this level you probably do get more bang for your buck, compared to strong €15 weed.

As of 2009, I’d say that more than half the coffeeshops in Amsterdam carry a form of Ice-o-lator, although some of those use a different name (Train Wreck and Bubble Hash are among them). If you specifically ask for Ice-o-lator at a shop, they’ll either show it to you, tell you they carry something similar with a different name, or they’ll tell you to check elsewhere.

It seems that €30 is about the average price that you’ll find, and as mentioned, finding Ice-o-lator for €15 or €20 doesn’t automatically mean you’ve scored a bargain. It might only be slightly more powerful than normal hash, and it’s selling cheap because it’s not as good as the expensive stuff. 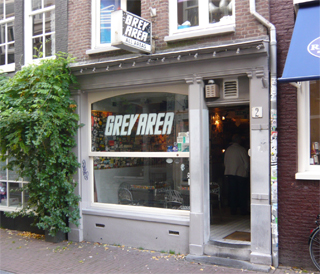 My best advice is to shop for this stuff at the places with the best reputations for quality, since they need to protect their reputations in order to stay popular among locals and aficionados who visit frequently. Shops in that group include the Grey Area, the Barney’s chain of shops, and the Rokerij chain of shops. As long as you avoid buying Ice-o-lator at the famous tourist places, then you are probably okay. Famous tourist places include the Bulldog chain, the Grasshopper, Smokeys (and pretty much every other place in the Rembrandtplein area).

Another thing to keep in mind is that, as long as you avoid the crowded tourist places, pretty much all of the people selling cannabis in these shops are very honest and frank about it. If you ask someone at a place selling it for €25 if their stuff is as strong as the place next door selling it for €40, they’ll usually tell you that it isn’t. Or sometimes they’ll tell you that this is a particularly strong batch, so it’s a bargain, and to be careful.

How do I smoke Ice-o-lator hash

This stuff can be so strong that it’s wise to treat it a bit like eating a spacecake, in that you don’t want to just do it on a whim. You want to be prepared, and choose your location wisely. Unlike a spacecake, this stuff does wear off in a couple of hours, so you only need to worry about your immediate future instead of half your day.

Especially if this is the first time you are trying it, you should pick a comfortable place that isn’t too crowded. Even a pro smoker who never gets paranoid might have an extreme reaction to Ice-o-lator, and it’s best to control that by being in a place where you can easily go outside for a bit of a walk, or even try it in or near your hotel or hostel room, so you’ll have an easy place to relax if you feel too weird.