Ice Skating in Amsterdam for free 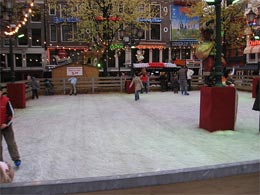 Hans Brinker is long gone, but if he weren’t a fictional character from the mid 19th Century he’d probably be spending quite a bit of time at the ice skating rink at Leidseplein these days. The rink, which opened on November 1 in the middle of the entertainment district square is larger this year at 20 meters by 18 meters, and will be in place through January 6.

Skating is free if you’ve got your own skates, and if not you can rent a pair for €4. The ice is open from 10 a.m. until 11 p.m. daily, and for those who get a bit peckish before or after a skate (or while watching others skate in my case), they’ve got snack stands set up around the rink where you can buy donut balls, small Dutch pancakes, waffles, and the like.

The canals haven’t properly frozen in quite a few years and if Al Gore is right they may never freeze again, but the good news is Amsterdam has a second temporary rink ready to go for the second half of winter. Open from December 21 through March 4 2008, the ice rink on Museum Square between the Rijksmuseum and the Van Gogh Museum is also free if you’ve got your own skates, and rentals will be available.

I’ve never actually ice skated before, but 20 x 18 meters sounds kind of small to me. I have a feeling that if I ever were to skate I would quickly be one of those people who skates diagonally for a long way across the rink to build up mind-blowing speed, then I’d jump up in the air and do various spins, turns, and what have you. I’m guessing I’d need more than 10 meters or so to build up enough speed to properly complete all those spins and flips I have in mind, but I’m pretty athletic so who knows? If the rink did turn out to be too small for that then those donut balls sound pretty tasty as an alternative.