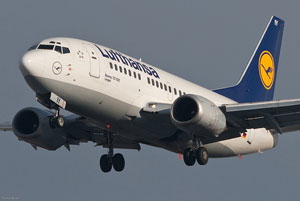 If you remember way back to the summer of 2008, airfare to Amsterdam from anywhere in the United States was starting around $1,000 and going up from there. Now, in 2009, you can fly here for around $700, and some airlines even have sales popping up that are below that.

Lufthansa sent me a notice this week about this promotion they are having with 50 European cities on sale, starting at $204 each way. Strangely enough, the $204 deal is to Berlin, which is usually one of the more expensive cities to fly into in this region. Madrid is starting at $230 on this sale, and Amsterdam is starting at $367 each way. That might not be the best deal around, but this one also comes bundled with a $150 prepaid card, as long as you are one of the first 500 people to sign up.

Frankly I’d go to Berlin if I could at that price, and save Amsterdam for another trip, because usually flights to Amsterdam are right behind London when it comes to cheap fares from the United States. Cheap international flights are easy to find this summer, pretty much no matter where you are going, so check out the possibilities before you decide to stay near home.

In case you haven’t heard, it’s also easy to find cheap hotels in Amsterdam this summer. Last summer you’d be spending a minimum of US$100 for even a basic double room in a one-star hotel, but this summer you can get something around 3 stars for that price, and closer to US$60 for that same one-star.

If your budget is a bit lower you might consider staying at one of the Amsterdam hostels, which almost all have private rooms for cheaper than one-star hotels, as well as beds in dorm rooms starting around US$25 per night. This city is packed with hostels, so in order to narrow things down we’ve put together lists and reviews of hostels that are smoke-friendly, hostels in the Red Light District, and hostels near Vondelpark (which is an excellent location in summer, but not so much in winter).

Check out the whole list of special Amsterdam hostel maps and reviews, and you are sure to find one you can afford in the area you want.