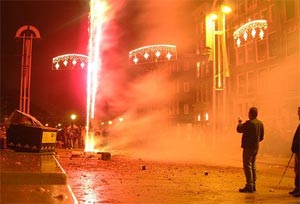 In spite of its unpredictable and often gloomy weather during the period, Amsterdam is definitely one of Europe’s hot spots each New Years Eve. Some cities ring in the New Year in calm and dignified ways, but not Amsterdam. The whole city becomes one big party, although the locals and the many tourists do seem to find themselves separated for most of the evening. December in Amsterdam is fairly low key until the end, but the place really does erupt, so it’s not ideal for everyone.

Starting even a day or two in advance, the children of Amsterdam begin celebrating with small fireworks, often surprising passersby as they unsuspectingly go off at your feet. As New Years Eve begins, most of the locals are making their way to private parties or other subdued affairs, and the throngs of tourists start filling up the main squares.

This is otherwise the dead season in the city, but obviously the competition for available rooms makes this a bit difficult. The best advice is to book early, and you might actually get a good deal. Even up until the week or so before you can still usually find hotels in the city center, and some of them will still have affordable rooms. This isn’t a city that will triple their normal rates on popular occasions, but the high demand means bargains will be very hard to come by, especially if you wait until December to book.

The city lights up with public fireworks displays in various neighborhoods through the center. The largest and most dependable one is in Dam Square, but there will always be several competing displays just after the clock strikes 12.

If you aren’t interested in getting beer dumped on your head and losing your hearing from all the spontaneous celebrating, try heading to one of the city’s larger bridges for views of often more than one fireworks display. The Skinny Bridge over the Amstel is popular, but any of the bridges over the Amstel in the city center is a good position.

And as this video shows, fireworks displays aren’t just limited to certain parts of the city – they’re everywhere!

Since New Years Eve is such a big deal in Amsterdam, it’s no surprise that all the clubs plan special events long in advance. The more lavish ones feature top international DJs and price tags that can range from €30 up to over €100 for the biggest events. Book your ticket well in advance if there is one you are partial to.

This can be a bit frustrating and unpredictable. Restaurants in Amsterdam tend to be either closed on New Years Eve (most of the fine-dining spots) or book reservations well in advance. Most of them that are open do tend to close around 11 p.m., so it’s not the place you’ll be popping champagne either way. Many of the touristy places in the Leidseplein area are crowded, but accept walk-ins if you arrive early enough.

The city has a major hangover on New Years Day. Most shops and even many restaurants are closed completely on New Years Day, but since many of the tourists aren’t flying out for another day or two, most of the main bars, coffeeshops, and restaurants in the tourist districts are open to accommodate the crowds.

An early version of Chinese New Year is celebrated in the small Chinatown in Nieuwmarkt, with yet more fireworks and traditional costumes and performances.