One-third of the Red Lights Will be Unscrewed 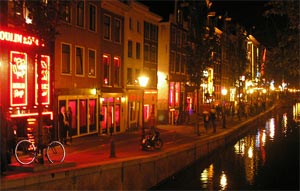 As part of a 5-year-old plan to clean up some of the criminal elements present in Amsterdam’s world famous Red Light District, the city has announced a deal to buy 18 of the buildings in the area for €25 million, which will close down about one-third of the windows currently operating.

The mayor of Amsterdam, Job Cohen, acknowledges that the prostitution is part of the city’s history and is a major tourist attraction so Amsterdam isn’t interested in shutting it down, but “What we do want is to get rid of the underlying criminality,” he said. Representatives for the city claim the windows are a magnet for crime and money laundering, and if that’s true then the closing of some of the windows might be a good idea.

The city’s plan was criticized by a spokeswoman for the Dutch sex worker’s union, De Rode Draad. “We believe that less windows means more exploitation of women,” said Metje Blaak. “If the windows close down, women who are being exploited will be hidden somewhere else where union representatives and health workers can’t make contact with them.”

It sounds like future tourists won’t really be affected by this move. If 51 of the 150+ windows in this main red light district are closed the area will still be an interesting novelty for tourists to see. And if they are able to reduce crime by doing this, then all the better. Anyone who’s wandered through the area on their way to some of the coolest bars and clubs in the city knows that petty crime is always lurking around, even though visitors still feel safe.

And particularly on the main bridge through the center of the Red Light District, I’m pretty tired of being offered fake cocaine and heroin along with a just-stolen bike. I have a feeling this sort of thing is not what the city is most worried about, but a general clean up of the area should do much more good than harm.

Also, if the buildings now owned by the city follow the plan and become home to new shops and housing, the area should improve a bit this way as well. I, for one, am really glad the city is interested in preserving this famous tourist attraction. Amsterdam just wouldn’t be the same without it, and it’s always hilarious to see the reactions of first-time visitors to the area.

If you’ve never been there yourself, you should know that the Red Light District is a must-see attraction for every adult visitor. Especially during the day, the streets are always packed with tourists of both genders and every adult age group. This is one place in the world where there is no shame in getting a glimpse at the sex industry.