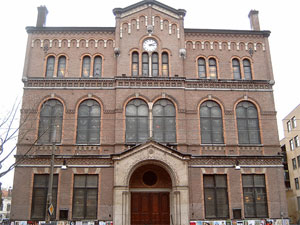 The Paradiso club is one of two famous mid-size concert venues in Amsterdam, along with the equally nice Melkweg a few blocks away. The club was converted from a church and opened in this form in 1968, but you can clearly see its church origins on both the inside and outside. The main hall still has the church windows behind the stage, and balconies still look down over the whole floor level.

The club hosts international touring acts most nights of the week, although occasionally there will be a big Dutch act or even a lecture or other cultural event scheduled. Since most of these touring acts crisscross Europe from spring through fall, there are definitely fewer concerts during winter, but of course the schedule varies weekly. The Paradiso has hosted the Sex Pistols, the Rolling Stones, and nearly every other act that would play in a venue with a capacity just over 1,000 people in Amsterdam. Between the Melkweg and the Paradiso, they have a lock on mid-sized concerts in the city, and both clubs have amazing lists of legends who’ve played in them.

The specifics can vary, but generally on most Thursdays through Saturday nights the Paradiso hosts regular dance events where the DJ is the main attraction and the music tends to follow a particular theme based on exactly which party is on that night. They also occasionally book one-time events where a local promoter will rent the place and promote a DJ event, but generally you’ll find regular events that are the same each week.

You have to pay a separate admission for these parties, even if you’ve earlier paid to see the live show. The admission charge is usually around €6 and they typically start around 11:30pm and then go until at least 3am. 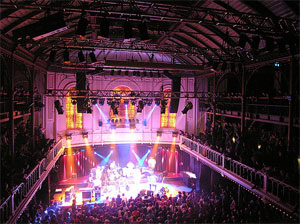 For concerts you can go to the official Paradiso site and you’ll see their current concert calendar. The site is all in Dutch, but you’ll be able to at least see who’s playing without knowing the language.

For an easier to use listing you can check out the Paradiso listings at Pollstar.com. This site is the concert industry trade publication and they provide thorough listings for all major events.

If you are coming in the next week or two you can also search the calendar at UnderwaterAmsterdam.com. Click on the What’s On link and you’ll see every concert, cultural event, and party in the city, but they also list lectures, movies, exhibitions and other things as well. The DJ events are listed under Parties for each day, and even though it doesn’t look like it on the site you can click the name of the event for more information.

Membership is required for most events

Just as with the Melkweg, most events at the Paradiso require you to buy a “membership”, which can be bought on your way into the venue. The cost is €3 per month or €18 per year.

Getting advanced tickets for Paradiso

You can buy tickets from the Paradiso box office, but you can also get tickets from the VVV tourist office, the GWK offices, and the AUB ticket offices in the city. Just ask around and you’ll be able to find a place near you, and several record shops in the city center also sell tickets to most events.

You can also get advance tickets online from Ticketmaster.nl. The site is in English and they even carry tickets for the DJ parties, but the service charges add up quickly.

You can see on the interactive map below that the Paradiso is just southeast of the Leidseplein Square. For a better view of how this fits into the city center check out the main Amsterdam map page.