Places to eat in Amsterdam 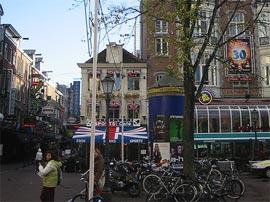 Most every first-time visitor to Amsterdam is really psyched to be heading here, but with the possible exception of the French fries thing, very few people know what or where they’ll be eating. This isn’t really a big food destination. The good news is that the selection of cuisines is nearly endless, and prices tend to be moderate. You might also want to look into what to eat in Amsterdam, but here we’ll discuss where to find the food.

Depending on what you are used to, Amsterdam’s general dining scene might be normal or really odd to you. Typical of most of continental Europe, you’ll find very few large or chain restaurants here outside of the usual suspects of McDonalds and Burger King etc. Nearly every place where you’ll go to sit down for a decent meal will be a small place that is independently owned. There are a few major restaurant neighborhoods, which are summed up below, but for the most part, no matter where you are in the city center you’ll not be more than a few blocks from at least a few decent restaurants, and probably more than a few.

You can get personal opinions on one restaurant or another, but for the most part the restaurants here tend to be good, but rarely great. Since there is very little “local” food it means there are endless possibilities of ethnic choices from around the globe including abundant Italian, Greek, Middle Eastern, Chinese, Argentinean steak houses, French, Surinamese, Indonesian, Spanish, Mexican, Tibetan, Ethiopian, and just about anything else you can think of.

Again, unlike many famous cities, like, say, London or New York City, Amsterdam has restaurants and take away shops spread pretty evenly throughout the center. No matter where you are standing, you’ll be no more than a few blocks from at least a few choices, although it might not be obvious exactly which direction you’d need to travel to find them. There are several notable restaurant neighborhoods though, and some are much better than others. Below you’ll find a summary of the main food areas.

If you walk straight out of the main train station and then along the busy street that leads directly away from you, you’ll find dozens of restaurants to choose from. This busy street is called the Damrak, and it’s probably the worst place to look for food in the city. Since there is an endless stream of foot traffic, much of it by tourists who won’t return to these restaurants anyway, there is almost no incentive for these places to serve quality fare. The rents are high, and rubbish places can still stay busy, so if there are any good restaurants in this neighborhood (which there probably are) they get lumped in to the bad reputation of the other places. Locals rarely eat in this area, and you are better off avoiding it as well. If you veer right out of Centraal Station and head toward the Singel Canal instead of going along Damrak, you’ll find many local cafes and modest restaurants that should be just fine.

The Red Light District has many wonderful things to offer, but great restaurants are not among them. This is a great place for bars, coffee shops, clubs, and a few other things, but not a place to window shop for quality restaurants. There’s a prominent FEBO in the middle, so your late night munching is taken care of at least.

Yes, that means ‘new market,’ and it’s just a bit south of the Red Light District proper, but this area is teaming with restaurants. There’s a concentrated Chinatown here, with the usual line up of similar restaurants, some of which offer a reasonably priced all you can eat buffet. Quality in the Chinatown is typical of most worldwide Chinatowns, in other words, pretty good, but rarely great. The Chinatown here also has quite a few options from all over East Asia. There are Vietnamese, Thai, Japanese, and of course Indonesian place mixed in, so this is a great place to go if you’ve got an open mind but aren’t sure of exactly what you want.

If you are standing in Dam Square and head along the busy street called Damstraat, which goes southeast in the direction of Waterlooplein, you’ll find dozens of mixed restaurants all lined up in a way similar to Leidseplein (described below). This is definitely a touristy area, but you’ll still find many interesting places in many different categories, mostly at quite reasonable prices. If you are staying in the Red Light District or elsewhere near Centraal Station, this is a mini jackpot of places to check out all in a row. 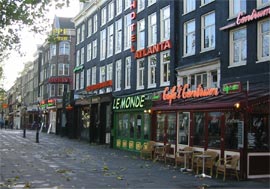 This area is known more for bars and nightclubs, but there are plenty of restaurants mixed in, including some really posh and pricey ones. On the square itself you’ll find a few of the old “grand cafés” with the wicker furniture out front, and these are a great place to hang out and watch the city go by while enjoying some food that otherwise wouldn’t deserve the high-ish prices. Just walk toward Rembrandtplein and you’ll find many options on every street, including many Middle Eastern take-away places and a few sandwich shops.

The grand daddy of them all, this might be one of the best restaurant neighborhoods in the entire world. No matter where you are staying, as long as you have more than 24 hours in Amsterdam, you should come out to Leidseplein for at least one lunch or dinner. In the small streets just off the main square you’ll find literally over 100 different restaurants lined up next to each other creating a culinary density that is an attraction all by itself. You could accurately call this ‘Amsterdam’s food court’ because just like in a shopping center, you can walk into this area and have so many choices that it’s hard to decide. With the exception of a few fast food chains, these are all small sit-down restaurants, most with al fresco seats out front.

They all have a menu posted out front, but on slow evening you might also have an employee urging you to come in as you are trying to decide. They are polite and it’s not really too annoying, so you should really make sure you are choosing the place you really want. As mentioned above, this is a really international food city and all of these choices are available in Leidseplein, and all within about a 5-minute walk of each other: Italian, Greek, Middle Eastern, Chinese, Argentinean steak houses, French, Surinamese, Indonesian, Spanish, Mexican, Tibetan, Ethiopian, and just about anything else you can think of.

For a bit more information on some of them don’t forget to check out the things to eat in Amsterdam page.

Click on the blue pin for more information on each area.