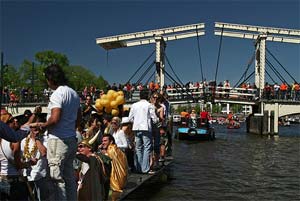 Queen’s Day is Amsterdam is one of those love-it or hate-it type holidays where a whole city goes mad for the day. It’s quite a spectacle with plenty to do, but public drunkenness and spontaneous and random-seeming celebrations are not everyone’s cup of tea. If you’ve heard it’s the city’s biggest party day and that appeals to you then by all means plan a trip in late April, but if you cringe at the sound of this description then avoiding it is probably the best advice.

What and when is Queen’s Day?

Koninginnedag, as its known in Dutch, started in 1889 to celebrate Queen Wilhemina’s birthday on August 31, and then it moved to April 30 when the new queen, Juliana, began her reign after her mother’s 1948 abdication. When the current Queen Beatrix took over in 1980 the holiday stayed on April 30, partly out of tribute to her mother, and partly because Beatrix’s actual birthday of January 31 would be a poor day on the weather calendar for a huge national outdoor celebration. April 30 is likely the permanent date now, but be aware that on years when that date falls on a Sunday the celebrations are shifted one day earlier.

The night before – Queen’s Night

Starting late the evening before, much of Amsterdam jumps the gun on the party. Clubs and bars all over town have special events and celebrations that last well into the night. It won’t be difficult to find something going on, and the Jordaan neighborhood is uncharacteristically wild on Queen’s Night. 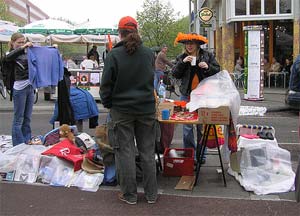 This giant national holiday also holds an odd distinction in that it’s partly a national flea market as well. On this day only, anyone can set up a stall or table and sell their used items or whatever else they fancy. The city isn’t exactly lined with people selling things, but you will continue to come across things for sale as you move about town.

This day has been compared frequently to Mardi Gras in New Orleans or the Times Square festivities in New York City on New Year’s Eve. Basically, the entire city is joined by hundreds of thousands of out-of-town Dutch visitors and tourists alike, and the party goes all day. Every major square will have a stage set up for concerts or other performances, and even smaller squares are often the scene of bands, DJs, street performers, and anything else people have the courage to try out in public.

Dam Square is naturally one of the major venues, as is the roomy Museumplein square that is surrounded by the major museums. Vondelpark, not far from Museumplein, is reserved for kid-friendly and family events, but it’s a huge park and there are always many things going on there at once. 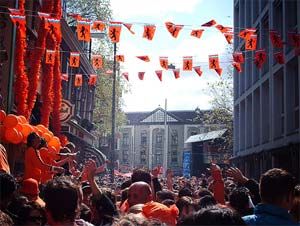 Wear orange or be left out

The Queen is part of the historic House of Orange, and the color has been adopted as a national symbol of pride. On days when the national football team is playing you’ll see a good percentage of the locals donning bright orange shirts and sometimes even pants, but on Queen’s Day the orange thing is taken to another level. Both decorations and clothing have a solid orange theme, which makes for some really interesting photo opportunities at the very least.

Starting early in the morning, all public transportation in Amsterdam is shut down for the day. Cars and taxis have a hard enough time in this city already, but with all the closed-down streets on Queen’s Day, driving around becomes nearly impossible. You, and everyone else in the city, will be walking, so wear good shoes.

The trains running between Dutch cities are still running on Queen’s Day, but be aware that this is a huge national holiday with many people going between cities to celebrate with friends and family, so the rail system can be packed from the day before through the day after the holiday.

Where to stay on Queen’s Day

Not surprisingly, Queen’s Day is one of the most in-demand times of the year for hotels and hostels in Amsterdam. The prices are at their peak, but usually not in a gouging sort of way. The key is to book early since many hotels get booked up more than six months in advance.