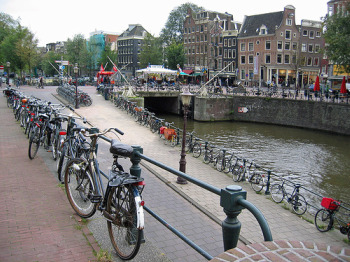 Visitors to Amsterdam would have to be blind to not see the number of people using bicycles to get around the city. Even non-cyclists might fancy the idea of renting a bike themselves. But as noted in the getting around Amsterdam section, renting a bike in Amsterdam isn’t usually the best option for people who aren’t familiar with the city or are just sticking to the main tourist attractions. Distances aren’t terribly far, and public bike racks are so full that it can be tough to find a place to park your bike once you get where you’re going.

For anyone who loves riding bicycles, however, Amsterdam can be the ideal starting point for cycling trips in Europe. After a few days of getting acclimated to the local time and enjoying the sights of Amsterdam, the Netherlands is an excellent introduction to cycling life on the continent.

The country is full of cycling enthusiasts – from people who ride bikes everyday to and from work, school, or the store, all the way up to how crazy about their professional cyclists the Dutch supporters get. Not only that, bike paths are maintained perfectly and the country is almost entirely flat – no uphill slogs to worry about. Even if you’re planning a longer cycling trip through Europe, there’s no better country to start in than the Netherlands.

So if you’re thinking of a cycling trip in Europe this year, you’ll be pleased to know there are still cheap flights to Amsterdam available (you just have to fly over before June, when prices shoot up for the summer peak season, or wait until the fall). And again, spend a few days in Amsterdam before you set off on your cycling trip – it’s a fabulous city and one that can be well-covered in 3-4 days, so you won’t feel hurried if you start your cycling adventure after only a few days of sight-seeing. As with the prices on flights, hotels in Amsterdam will be cheaper if you visit before June, or wait until after the high summer season.