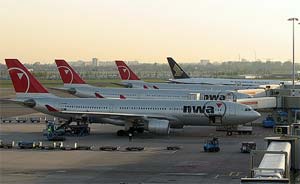 Each month I examine the trends in airfare to Amsterdam from North America. As of late May 2008, things are looking fairly grim for anyone hoping to snag a really cheap flight. The insane price of fuel has definitely crept its way into airfare prices, and yet still the airlines are getting clobbered and in some cases cutting back on service, which will only make prices go higher.

I use a database tool to find the lowest possible fare between cities in a given month, so below you’ll find the list of airfares to Amsterdam for trips any time in July 2008, and these prices are valid as of late May 2008. Chances are good that if you search for your own flight the fares will start a bit higher, but at least these prices listed below will help you with a baseline so you’ll know if the fare you are being quoted is near the minimum or more inflated.

Best prices on travel to Amsterdam in July 2008

It always amazes me how Atlanta, which is home to the busiest airport in the world, is always at or near the top of the price list. Perhaps the fact that Delta alone accounts for over 50% of all passenger traffic means there isn’t much real competition at all. If you fly from Seattle or Los Angeles you might have to change planes in Atlanta on the way to Amsterdam, and you can get tickets about US$300 less than those starting their journey at Hartsfield International.