Things to know about Amsterdam hotels before you book 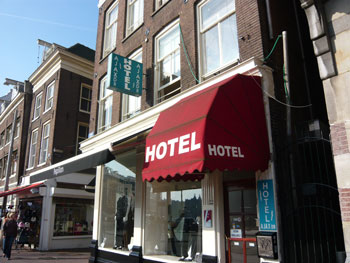 Recently I was doing some final research on my list of recommended cheap hotels in Amsterdam and I was reminded of a phenomenon that I think needs to be addressed. I was reading some reviews on TripAdvisor.com about hotels that I know and like, and I was a bit horrified to read some of the vicious reviews left by recent guests.

If you’ve read much about the various scandals around user-generated hotel reviews then you know to take them with a grain of salt, but most of these seemed like they were written by real people who were genuinely disappointed so I wanted to discuss some of the reasons why.

The main problem: Not adjusting your expectations

I’ll discuss some more specifics below, but the quick version of this whole thing is that many people are used to hotels in the US or Canada or Australia or resorts in Mexico and so forth, and they naturally want to compare every room to hotels in those places. That’s like comparing a suburban Wal-Mart that is open around the clock to a small convenience store in the heart of the city, and then complaining that the small store doesn’t have rock-bottom prices AND a huge selection. There’s a reason they don’t put Wal-Marts in historic city centers so you have to compare small stores to other small stores and forget Wal-Mart completely.

Especially if you opt for a cheap one, the hotels in Amsterdam often feel disappointing for first-time visitors. Don’t be scared by online reviews that say the hotel you are interested in sucks because pretty much all of them in the same price range get the same type of reviews.

Things you should know about Amsterdam hotels in general

Most of this is actually true in most of Europe, and some of these things are even worse in London. First-time visitors to New York City also face most of these same issues, which is one reason why online reviews of cheaper hotels in that city are also notoriously bitter and complainy.

1 – Your room will be small 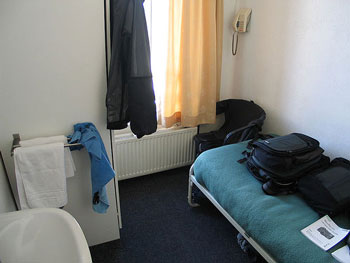 North Americans in particular are often horrified when they first see their room and discover it to be around half the size they were expecting at this price. Europeans have almost always built small rooms in all structures, partly because they are easier to keep warm. If you want to stay in or near the city center it’s just something you’ll have to get used to.

It’s also interesting that it doesn’t matter if you are staying in a 4-star business hotel or a 1-star flophouse, the room will still be smaller than you are probably expecting it to be. The 4-star rooms are larger than the 1-star rooms, but they are all small compared to similar rooms in the US and in resort areas.

2 – The furniture will appear to be flimsy

This is something that you’ll generally only find in 3-star and below hotels, so skip this if you are a first-class traveler. The thing is, the rooms are small and getting heavy furniture into these rooms is very difficult if not impossible. Some hotels are literally furnished with Ikea pieces, and this is another very European thing. Especially in urban environments, things that are light and compact are good. If you think your particular hotel cheaped out on you, you may be happy to know that they are all pretty much the same at that star level. 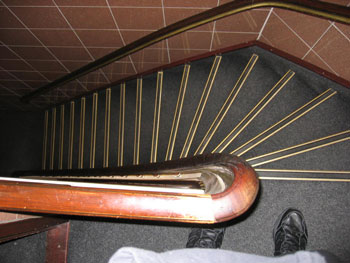 This is the only one on this list that is pretty much exclusive to Amsterdam. Due to the tax laws a few centuries ago, most of the houses on or near the canals chose to build narrow structures, and these novelty staircases were the norm. If you haven’t seen one yet you’ll be shocked when you do, as the safety inspectors would never allow these in most other cities on earth.

The good news is that major accidents seem to be rare, and most people get the hang of these things (by going single file and staying near the outer wall), so they tend to be more of a conversation starter than a health risk.

If an Amsterdam hotel has multiple floors and no lift then it can’t be higher than 2 stars, so look for 3-stars and above if you feel like this will be a problem for you.

4 – The service will feel neglectful at times

This isn’t normally a problem at 3 stars and above, but it’s a common complaint at cheaper places. Many 1 and 2-star hotels in Amsterdam are family run, with only a couple of outside employees to help out. At this price range they can’t afford to pay an overnight clerk and a concierge to answer questions and book tours and such.

If having someone at your beck and call is important to you then you’ll have to stay in a fancy place. The cheap hotels in this city are more best suited to people who are self-reliant and don’t have long lists of special needs.

Pretty much every hotel in Amsterdam that has a TV at all is hooked up to the same cable that offers around 30 channels. Fortunately there are some English-language ones mixed in there, but the TVs themselves are generally tiny compared to the US, at least in the cheaper hotels. A small TV isn’t enough to make many people want to change hotels, but it’s worth knowing that if you did it would be small there too.

What to expect in each star category

1 star – These cheap places tend to have tiny rooms with minimal furniture. If you are the type who wants to pay as little as possible for a room since you have no plans on spending more than 7 or 8 hours a day in it anyway, these should be fine.

2 star – These are fine for most budget travelers, though the room will be small as well. You’ll often get a tiny TV, and breakfast is almost always included as well. But these places are typically in older buildings that can’t legally be renovated much so they don’t have elevators and they almost all have those amazingly steep stairs.

3 star – In this category you’ll usually get an elevator and fairly comfortable furniture. You’ll also get a large enough staff to usually answer your questions about the city, but the rooms will still tend to be small. Breakfast is always included in this mid level.

4 star – These tend to be business-oriented hotels and the rooms will be about the size of a cheap hotel or motel room almost anywhere in the United States, though the bed will be comfortable and the TV will be big, plus you’ll get free shampoo and so forth. At this level breakfast might cost extra, ironically enough.

5 star – There are only a handful of 5-star hotels in Amsterdam and they are all international business chains like the Intercontinental and the Sofitel. They’ll resemble 5-star hotels everywhere else in the world, which is the whole point of them existing. Breakfast is almost never included at this level.